Sit a spell, and pass the sweet tea 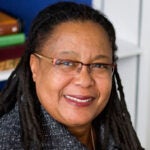 Dean Hammonds appointed to HBCU advisory board by President Obama

A student reflects on being a Southerner at Harvard

During the opening days of my freshman year, this was a typical meet-and-greet conversation for me. Somebody would ask who are you, what dorm are you in, what concentration are you thinking about, where are you from? I could get through the first three questions without a hitch, but that last question would be a little tricky. By answering it, I would admit I was from the South: home of rampant racism, delusional Southern belles, and those creepy hillbillies from “Deliverance.”

Because of this fear, I worked over the summer to minimize my accent as much as possible; I didn’t want to be associated with the stigma of being “one of those Southerners.” It’s embarrassing to admit how many times I watched “The Departed” to try to get a Boston accent; despite my efforts, my Southern accent clung to me. So, I tried to give myself a WASPish air through clothing. There are enough argyle sweaters in my dresser to clothe Sherman’s army for another march. It still wasn’t working. Without a proper Boston accent, with a barrelful of argyle sweaters and socks, I made the trip to Harvard. Johnston Gate loomed ahead.

Once I arrived, I started hearing the New York accents, the British accents, and I started worrying. Where are the Southern folks? Blending in wasn’t working. It was too hot to wear argyle. With no other options, I started to meet and greet. I started meeting my classmates in Annenberg, in the Yard, in class, and elsewhere. But they didn’t give me flak about being a backwoods hillbilly. I was a Harvard student who just happened to be from the South.

The trouble of telling where I’m from didn’t come from my classmates. Most of it came from me. I expected people to giggle at my accent, to give me dumbstruck looks when I said the word “Arkansas.” However, my classmates have been very accepting of me, and my Southernness. Sure, they mentioned some stereotypes, but only in a joking manner.

Because of this acceptance, I tossed away all of the things that I used to hide my Southernness. That terrible accent that was a mixture of “The Departed” and “Good Will Hunting”? Gone. The WASPish sensibilities? Adios. The argyle? Well, I still have it; there’s something to be said for argyle: It just looks good.

Instead of adapting to Cambridge, I made Cambridge adapt to me. Like Quentin in William Faulkner’s “The Sound and the Fury,” I have made Cambridge into my own little Southern town. Cambridge isn’t an impersonal place for me; it’s a town where I can talk to anybody just like I can back home. I can talk in a full-force accent and open doors for people. However, the single most important contribution that I have made at Harvard is advocating the consumption of sweet tea. That’s right, sweet tea. Tea with sugar, and lots of it.

With a newfound confidence in my Southernness, I began looking deeper into my cultural heritage. I’m even taking a class on Southern literature and culture, taught by professors John Stauffer and Jason Stevens, which has given me a greater understanding of the South’s place in the United States. The course also provided an ego boost when I realized how much great literature has come out of my homeland.

I live in the South. I accepted that a long time ago, along with all of the baggage and perks (the great accent, for example) that comes with being a Southerner. But coming to Harvard was a daunting prospect that made me question whether being a Southerner would be a setback for me here. The people I’ve met at Harvard made me feel welcome. If anything, being at Harvard has made me more Southern. I take pride in my region now, whereas in the past it was simply a “postage stamp of soil,” to quote Faulkner. Now, I feel that it’s my home, a place to which I can always return. Without Harvard and the amazing people that I’ve met here, it’s likely that I never would have realized my love for the South.

Maybe Yankees aren’t so bad after all. Nah.