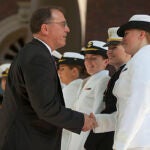 From Ivy to military

Rocks, food, tango, poetry. Which of these does not belong?

To Rosario Del Nero, all of them do.

Del Nero began his career as a geologist, but, “Let’s face it,” he said, “food is more interesting than rocks or minerals or fossils.”

“With food, I found that I have a touch,” recalled the Italian-born Del Nero. “As a kid, I noticed I could do the things that my mother did — and she’s a very good cook — with very little effort.”

With his “touch” and passion for cuisine, Del Nero immigrated to America and, without classical training, became an accomplished chef years ago. “I have a gift,” he said, “and I cultivated it by listening, tasting, traveling, and exploring.” And, he joked, “I have the added credibility of having been born in Italy.”

Throughout much of his life, Del Nero has owned and operated restaurants; he has been the corporate chef of Bertucci’s, where he dreamed up recipes that have become classics; now he is director of culinary development for Joseph’s Gourmet Pasta & Sauces and Buitoni North America.

As for the tango and poetry and how Del Nero got to Harvard? The answers lie in Buenos Aires, where he spent his adolescence devouring the poetry of its luminaries. (Coincidentally, he lived one block away from where writer Jorge Luis Borges once lived.) Both the city and Borges would again play a major part in his life 40 years later when, as an adult, he sought an A.L.M. in Spanish language and literature at the Harvard University Extension School.

“The love of literature never abandoned me,” said Del Nero of his decision to enroll. “The food industry is very intense, very absorbing. But a few years ago, I found that studying was not a task, but a relief and a pleasure.”

His thesis, “Tango: The Living Poetry of Buenos Aires,” explores the famed Latin American dance and music and its ties to poetry that fused a one-of-a-kind genre involving writers such as Borges, Julio Cortazar, and Juan Gelman.

“Tango is very well known as a music and dance genre. But throughout the last century it became so entrenched in the cultural life of Buenos Aires that the city’s best-known writers started to write poems that were either intended to be tango lyrics or were later adopted by tango musicians who made them into bona fide songs,” Del Nero explained. “In Argentina, tango is a way of life. People talk tango without even realizing it.”

Tango is a genre of exile, said Del Nero, “a dance born from immigrants, with an intrinsic sadness.” But now, Del Nero is doing a happy dance. He is graduating with a 4.0 and the Thomas Small Prize, which is annually awarded to two A.L.M. recipients who have stellar academic achievement and character, and he also received honorable mention for the Dean’s Prize for Outstanding A.L.M. Thesis in the Humanities.

“Harvard is an academic paradise,” said Del Nero, who never missed a class. “What I learned here, I use every day. I use my knowledge in writing menus, recipes, interacting with people, and knowing a culture intimately. I use my studies daily.”

To see a list of 2009-10 Harvard Extension School prize and award recipients.