Palestinians on the screen 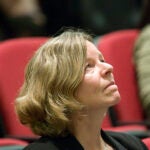 A blend of documentary film and cinematic dream, the subtle and quiet works of Kamal Aljafari convey profound and unsettling emotions.

The Benjamin White Whitney Scholar and Radcliffe-Harvard Film Study Center Fellow at the Radcliffe Institute for Advanced Study, Aljafari recently completed his film “Port of Memory” while at Harvard. The evocative work explores the lives of members of the Palestinian community living in the town of Jaffa, Israel. The haunting film captures the unrest and uncertainty of a handful of inhabitants as they struggle to cope with the area’s changing landscape, its new political realities, and their possible eviction.

Aljafari’s works mirror his family’s own struggles with upheaval and displacement. His grandparents fled Jaffa during the 1948 Arab-Israeli War. After studying at the Hebrew University in Jerusalem, Aljafari left for Germany in 1998. While in Israel he started “going to the movies to escape my life,” he recalled. He eventually graduated from the Kunsthochschule für Medien (Academy of Media Arts) in Cologne, Germany, in 2003.

His films are personal for another reason. Aljafari often casts his family in the leading roles. In “Port of Memory,” his uncle, aunt, and grandmother portray three of the main characters.

“I am actually a filmmaker because of them. They are very cinematic,” said Aljafari. “I am very interested in working with non-actors who can help you create a cinematic voyage.”

With its documentary feel and minimal narrative, “Port of Memory” poignantly chronicles the characters’ lives, often without words, for instance, letting the close-up image of a woman compulsively washing her hands, or of a man on a moped who stops periodically to emit a primal scream, evoke the picture’s rawest emotions.

“They are dealing with very serious problems, which are troubling their minds and their souls,” said Aljafari of his film’s protagonists. “It is very much about the inner life of these characters, and more than what we can see and perceive in the images themselves.”

The film premiered in March at the Centre Pompidou in Paris and won the Louis Marcorelles Award at the city’s Cinema du Reel. At the movie’s London screening, the international film magazine Sight & Sound called it “a work that can only be seen, not talked about; all that can be said is that it brings cinema to a place beyond the question of fiction, documentary, and video art. And it does so as if no camera were there, or there were a camera without a man. The invisibility here is of film itself.”

His newest work is reminiscent of his 2006 picture, “The Roof.” The film, one reviewer wrote, uses “elegant cinematography, unhurried rhythms, and fragmented narrative to convey how space, time, and history have been molded by politics and Israeli-institutionalized neglect. The roof of the title is an absent one, on the unfinished house where his family has lived since resettling there in 1948, and it functions as a place of waiting marked by constant deferral.”

“The Roof” won the Best International On Screen (Video) Award at the Images Festival in Toronto, and the award for best soundtrack at the FID Marseille documentary festival in France.

Equally compelling is Aljafari’s exhibit titled “Not Without Me,” currently on view at the Radcliffe Institute’s gallery in Byerly Hall. The show consists of postcard-size still shots taken from the roughly 50 Israeli and American films that were made in Jaffa during the 1970s and ’80s.

Often the setting for Chuck Norris action films of the era — with an American hero engaged in fierce battles with terrorists — Jaffa was cast “as a semi-ruined, nondescript anyplace,” Aljafari writes in the show’s notes. The films, the notes continue, “re-imagined the city as a stylized Middle Eastern backdrop for a larger battle between Western heroism and Oriental barbarism,” simultaneously ignoring the local population.

“It’s totally crazy,” said Aljafari of the town’s cinematic history. “It’s like coming to Cambridge and making a film in Swedish, and acting as if no one in Cambridge exists.”

His exhibit captures that incongruity with eerie precision, featuring many shots of onlookers, out of focus of the main frame, watching the surreal action of the filmmaking unfolding in front of them. The show contains only a fraction of the approximately 20,000 images he produced during his time at Harvard.

Aljafari hopes to produce a book from the images and is at work on his next project, which he also plans to film in Jaffa.

While he acknowledged that his work “can’t change political or social reality,” he said it can help him to express his feelings and share them with others.

“I am very much interested in producing emotions and expressing emotions,” said Aljafari, “and communicating with people.”