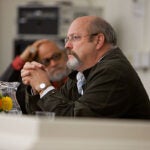 The nature of reality

The global dimensions of hip-hop, a thriving subculture of art, music, and dance, was at the heart of a two-day Harvard panel last week aimed at helping educators use the genre as a teaching tool in the classroom.

“The Language of Global Hip-Hop Culture: Africa and the Middle East Region” used hip-hop — which was born in New York’s Bronx neighborhood in the 1970s and is based on themes such as urban life, social issues, and politics — to explore contemporary art, culture, language, and society in the Middle East and sub-Saharan Africa.

Sponsored in part by the Outreach Center at Harvard’s Center for Middle Eastern Studies and Harvard’s Committee on African Studies, the April 30-May 1 sessions included a live performance by Syrian-American artist Omar Offendum and Cape Verdean-American artist Shokanti. Other panels explored hip-hop’s North American roots, its influence in countries such as Egypt and Israel, and tips for attendees on using the art form in the classroom to explore global studies and cultural diversity.

In a Friday opening panel moderated by Harvard history professor Caroline Elkins, who also chairs the Committee on African Studies, Harvard scholars explored the historical, political, and musical context of the hip-hop genre in sub-Saharan Africa, in particular Mali and South Africa.

Using samples of videos by Mali musician Neba Solo, Ingrid Monson discussed how artists, particularly those in more remote rural villages, appropriate forms of hip-hop into their traditional music. Solo, whose work was influenced by reggae, said Monson, Quincy Jones Professor of African-American Music, combines social themes and messages about AIDS, vaccination, the environment, and politics, with the balafon, a type of wooden keyed percussion instrument, to develop his own musical genre.

“One of the reasons that [Neba Solo] is much beloved is that he took a humble village instrument … and created a new, widely danceable and virtuosic style,” said Monson.

Understanding hip-hop in Mali requires listening to the ways in which “hip-hop is in dialogue with the larger musical culture and countryside” surrounding Mali’s capital, Bamako, she added.

With his comments, Adam Haupt, Mandela Mellon Fellow at Harvard’s W.E.B. Du Bois Institute for African and African American Research, said the development of hip-hop in South Africa corresponded with protests against apartheid and became a way for activists to fight for social justice.

In the 1980s, as apartheid was beginning to fall, informal educational systems arose outside the classroom that informed people about issues such as South African history, activism, class analysis, current affairs, and race and gender politics, said Haupt.

One such system was political hip-hop.

“The story of hip-hop’s introduction to Cape Town actually coincides with a particular sort of social activism,” Haupt said.

Haupt, who is the author of “Stealing Empire: P2P, Intellectual Property and Hip-Hop Subversion,” also warned that in South Africa state-controlled and corporate-backed media can subvert the important social messages and themes conveyed through hip-hop. But he acknowledged there is hope.

He offered the example of Black Noise, a South African group that opted to function like a nonprofit instead of signing with a major record label. It receives funding as a nonprofit, offers educational workshops, and has founded an activist international network.

“This is the most successful model in our country around activism,” he said.