From the cosmos to the cell 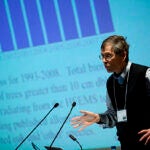 Radcliffe science symposium explains the many patterns of nature

To the eyes of today’s scientists, nature’s order is emerging in patterns large and small, from the vast cosmic web to the arrangement of genes on chromosomes, authorities from an array of fields said Friday (April 30) at the Radcliffe Institute for Advanced Study.

The participants from many nations gathered at the Radcliffe Gymnasium for a daylong science symposium to talk about patterns in the universe, in the body arrangement of diverse vertebrates, of the skeletal and nervous systems, of the brain and gut, among others. Speakers hailed from Massachusetts, California, New York, Germany, and Switzerland.

“There are really a large number of patterns found in nature, reiterated motifs that can be found in the natural world. Patterns are critical in nature at all levels,” said Rosalind Segal, senior adviser to the Radcliffe Institute’s science program. Segal is also a neurobiology professor at Harvard Medical School and a member of the Department of Pediatric Oncology at the Harvard-affiliated Dana-Farber Cancer Institute.

Harvard-affiliated faculty members who spoke Friday included Segal, who delivered opening remarks, and another senior adviser to the Radcliffe science program, Astronomy Professor Dimitar Sasselov, who delivered closing remarks. Joanna Aizenberg, the Wallach Professor at Radcliffe, Gordon McKay Professor of Materials Science at the Harvard’s School of Engineering and Applied Sciences, and professor of chemistry and chemical biology in the Faculty of Arts and Sciences, spoke about the “Art of Mineralized Tissues: Are there Any Skeletal Patterns that Nature Did Not Create?” Clifford Tabin, head of Harvard Medical School’s Genetics Department, spoke about “Patterning and Morphogenesis of the Vertebrate Gut.”

Volker Springel, professor of theoretical astrophysics at the Heidelberg Institute for Theoretical Studies in Germany, spoke of patterns in one of the largest contexts that they’ve been detected: the universe.

Springel, who did a postdoctoral fellowship at Harvard, highlighted the latest findings about the cosmic web, a universe-wide network of matter, some visible, some not, that ties together the stars and galaxies.

The cosmic web is thought to be an after-effect of the Big Bang, which threw matter out almost uniformly in every direction. Slight variations in that uniformity, however, were enough for gravity to begin to pull together material over vast stretches of time, scientists believe, forming larger and larger aggregations that today are visible as planets, stars, and galaxies. Much of that material is invisible, however, forming webs of interstellar matter that ties all those bodies and formations together.

“The ultimate force behind all this structure is gravity,” Springel said.

The visible material that we think of when we consider the cosmos is actually just a small fraction of what’s out there, Springel said. The heavy elements that make up the planets are just 0.03 percent of the matter in the universe. Stars and black holes make up just another 0.56 percent. Even interstellar hydrogen and helium are just 3 percent, with most of the rest made up of dark matter and dark energy.

Using a supercomputer to simulate gravity’s process, Springel created and played a three-dimensional visualization that soared through webs of theorized dark matter and interstellar hydrogen, zoomed in on galaxies, at first starlike and then, as the image drew closer, it grew larger until star-laden arms were revealed, and then the stars themselves.

Springel pointed out that there are billions of stars in our own galaxy and billions of galaxies in the universe — plenty of material from which patterns can emerge. The largest known structure is called the Sloan Great Wall and is a collection of 10,000 galaxies a billion light-years from Earth that stretches more than a billion light-years across.

“The size of the universe is mind-boggling,” Springel said.

At the other end of the spectrum from cosmos-wide patterns are the molecular patterns of DNA. Denis Duboule, chairman of the Department of Zoology and Animal Biology at the University of Geneva and professor of developmental genetics and genomics at the Ecole Polytechnique Fédérale de Lausanne in Switzerland, spoke about his studies of vertebrate development and the striking patterns in which genes are arranged on the chromosome and activated in the same order as the body parts they regulate: head first, then neck, then back.

Duboule outlined studies to illuminate this phenomenon and the operation of the Hox family of genes, which regulate spinal development in vertebrates. He described his own work of adding and deleting Hox genes, which resulted in adding or deleting vertebrae. Much of this developmental process is regulated merely by when it stops, with snakes an extreme example of not having a stop gene to regulate tail development. Consequently, he said, snakes have great variability in their vertebrae, numbering in the hundreds.

“The time of activation depends on the position of a gene…. [This] lets us use the linearity of DNA as a morphogenic clock,” Duboule said. “Development is nothing but time.”