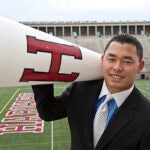 Kim Snodgrass has a plan to help other foster children thrive

Kim Snodgrass clearly remembers Dec. 11, 1998. It was her first day in the sixth grade, and the beginning of her steady education — as well as her salvation.

“From then on, I never missed a day of school,” said the master’s student at the Harvard Graduate School of Education’s (HGSE) Risk and Prevention Program, who will graduate today armed with ambition and a story of overcoming adversity.

As a young girl, she and her family were on the run. They camped out in the mountains and hopped to and from motels and shelters across southern California. They skipped out on apartments whenever the rent was due. They stole to survive, walking out of grocery stores with carts full of food, or filling up the car at gas stations, and then driving away without paying.

“That is what we were so used to, stealing things and getting what we needed whenever we needed it.”

Snodgrass watched as her stepfather and mother’s addiction to drugs and alcohol broke the family apart, gradually “disintegrating” her parents in the process. Eventually, her mother lost all rights to her five children. Between age 5 and 11, Snodgrass was in and out of at least 10 foster homes. Finally, at age 16, her long-term foster family adopted her, her younger brother, Max, and sister, Jennifer.

“I always knew from an early age what [my mother and stepfather] were doing was wrong, and I made a pact to myself that I was going to get myself out of this hole. I was not ever going to touch drugs or alcohol or smoke, and I was going to make it.”

Though she had only had sporadic formal schooling before sixth grade, she knew her escape route depended on education. She became a driven student and excelled academically.

“I used my education as my savior. It was like my thing that I could always go back to, no matter what happened in my life.”

Snodgrass attended the University of California, Irvine, where she studied community and public service. It was there that she dedicated herself to helping foster care children.

With her new master’s degree, she hopes to provide foster care children with access to support systems and mentors who can help them to develop important life skills and succeed in high school and college. As part of her program at Harvard, she developed an intervention method to help foster care youth transition to college and beyond, and is currently working with an HGSE alumna to explore using her program at a local nonprofit.

While at Harvard, she also produced an educational video about the foster care system, founded the club REACH (which stands for Realizing Every Action Creates Hope) to raise awareness about foster care youth in school, and worked on a model for a charter school designed for foster care children in connection with the Orangewood Children’s Foundation, a nonprofit in Santa Ana, Calif.

She also made time to teach at two local schools. The fast pace is the standard for Snodgrass, who admitted that the overachiever mentality is something of a coping mechanism, one that offers her life a certain kind of balance.

“I cram people into every second of the day. My schedule is back to back to back. It’s something that helps [keep] me from sitting down and crying. I don’t just dwell on the past, I think, ‘What can I do tomorrow?’”

After Harvard, “the possibilities are endless,” said Snodgrass, who sees herself getting a Ph.D. and working in the policy realm, or running a charter school or nonprofit.

But one thing is certain. Citing research that shows that children who face difficult challenges often succeed with the support of just one encouraging voice, Snodgrass sees her future mission clearly.

“So many people helped me get where I am today. I want to go back and help others. My mission is to be a child advocate, and become that voice for them.”

Her Harvard experience has helped her too, and prepared her to help others.

“Harvard was 100 percent where I was supposed to be,” said Snodgrass. “I am going to have a big tool kit when I leave.”