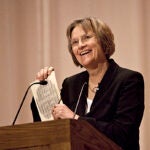 Chosen for contributions to teaching, advising, and mentoring

Dean Michael D. Smith announced May 11 that five professors in the Faculty of Arts and Sciences have been awarded Harvard College Professorships in recognition of their outstanding contributions to undergraduate teaching, advising, and mentoring.

“On behalf of our students, it gives me great pleasure to honor Michael Brenner, Julie Buckler, Emma Dench, Peter Gordon, and Dan Lieberman for their skill and generosity in the classroom,” says Smith, the John H. Finley Jr. Professor of Engineering and Applied Sciences. “Their wisdom, and the lessons they impart, will guide our students long after they have left Harvard Yard.”

The Harvard College Professorships were established in 1997, supported by a gift from John and Frances Loeb. The five-year appointments provide a semester of paid leave or summer salary, as well as additional support for research and scholarly activities.

“Teaching is absolutely central to our responsibilities as a faculty and as a university,” Smith says, “and the advent of our new General Education curriculum makes this an especially exciting time in our classrooms, with many of our faculty reaching new heights of creativity. The proliferation of Gen Ed courses testifies to the ingenuity, resourcefulness, and vision of our faculty.”

The new Harvard College Professors shared their guiding principles in the classroom, their views on the synergy between teaching and research, and their reaction to the recognition as exceptional educators.

“I was incredibly flattered and surprised at receiving this news,” says Brenner, who teaches classes on applied math, mechanical vibrations, and multivariable calculus, among other topics. “For what it is worth, I don’t feel that I am a good teacher yet, which makes it even more humbling to receive this honor.

Brenner’s Harvard College Professorship will help in his ongoing development of new courses and course materials, including two projects this summer: revising the class notes for his applied mathematics 201 course, with the hope of developing a textbook, and working with colleagues in the School of Engineering and Applied Sciences on a new Gen Ed class titled “Science and Cooking: From Haute Cuisine to the Science of Soft Matter,” being offered this fall.

“I have always felt that the students are by far the best part of Harvard, and teaching them is an honor and a true pleasure,” he says. “Indeed, I have learned tremendously from the students in many different ways — not just about the subjects that I teach, but also about teaching in general, and what it takes to be a good teacher and to communicate effectively.”

“I think a course where the professor is also learning creates a much better environment for students — although I don’t think it necessarily makes me look like I have my act completely together,” she says.

In addition to her half-dozen recent courses on Russian literature, theater, and culture, this pedagogical dynamo has launched two Gen Ed courses, “The Art of Interpretation” and “The Presence of the Past.” She’s at work on a third, titled “Masterpieces — Born or Made?” and a fourth on the former Soviet bloc.

“I used to think I would work out a set of courses and then keep teaching and re-teaching them, refining them further and deepening my expertise in these areas,” Buckler says. “But I have pretty much tossed out all of the courses I started off teaching and have learned that it is exactly the frantic scramble and the discomfort of teaching new things that I love most and find most productive.”

“In the digital age, the most pressing question that professors have to confront is, ‘Why should students come to class?’ Certainly not to hear you read your yellowed notes aloud to them. Or even to watch you deliver an impressive one-person show.”

The questions driving Buckler’s creativity include: What can we do together in real time that can’t happen in any other way?  How can students be empowered to take their share of responsibility for the quality of the course? How can courses be structured so the work is truly collaborative?

“Reinventing what a course should be is an enormous challenge, but also an opportunity,” Buckler says. “My pedagogical goal is to push myself to meet this challenge all the time. It makes me incredibly happy to feel that I am making a contribution to the life of this University.”

Emma Dench
Professor of the classics and of history

“I think of my teaching at Harvard as still very much in progress,” says Dench, a classical historian who joined the Harvard faculty in 2007. “But one thing I learned from the 14 years I spent teaching at Birkbeck College, University of London, was the value of being open to change, challenges, and learning new things all one’s adult life. So I hope my teaching here, as well as my research, will always be in progress.”

Dench has taught “The World of the Roman Empire” and “Roman Imperialism” in Harvard’s classics and history departments, and next year will co-teach a new graduate seminar in General Education titled “Rome and China” with Michael Puett, professor of Chinese history.

She says she is inspired by the immense diversity of Harvard students, and sees teaching as a process that helps make the best use of existing knowledge and past experiences while grappling with new materials and ways of thinking.

“It is exciting to try out new ideas in the classroom, and sometimes humbling,” she says. “There’s probably no better way to find out what works and what doesn’t!”

Gordon, a scholar of modern European intellectual history, admits he enjoys ruffling feathers in the classroom.

“I am keen to unsettle assumptions or settled convictions,” he says of his courses on topics in European intellectual history and Continental philosophy. “I love it when students take issue with what I’m saying. You know you’ve had a good session with students if, by the end of the hour, the room feels it’s strewn with feathers from the vigorous discussion.”

Teaching at the intersection of history and philosophy, Gordon has offered courses on Heidegger, Levinas, the Frankfurt School, and post-Holocaust philosophy. Next year he will offer “German Social Thought from Nietzsche to Habermas” and “French Social Thought from Durkheim to Foucault,” as well as seminars on political theology and theories of secularization.

“Teaching in my view works best when it is primarily about furnishing a model for students of what it is like to think in a critical manner,” he says. “This is what I try to do, as opposed to, say, thinking of myself as a kind of information delivery system, or as someone who contrives to affirm any sort of identity or ideology.”

Lieberman’s passion for teaching courses on human evolution, human anatomy, and human physiology comes, in part, from his keen awareness of his own good fortune in having had so many extraordinary teachers.

“I try hard to make classes lively and to express my passion for the material,” he says. “I tend to get rather excited about lots of things, and I make an effort to express my enthusiasm about anything I think is worth learning.”

Lieberman says he enjoys lecturing enormously, and particularly enjoys involving students in research. He’s especially proud, he says, that so many of his students have gone on to become co-authors on some of his major research papers.

“I have never believed that there is a trade-off between teaching and research,” he says. “I find that some of my best research ideas come from teaching and talking to students. Teaching makes me think in new ways, to question assumptions, and to keep up with new ideas and data.”

In the classroom, Lieberman says he always tries to consider ideas and information from a student’s perspective.

“Frankly, I feel very humbled and honored,” he says of the Harvard College Professorship. “So many of my colleagues are extraordinary teachers and scholars.”