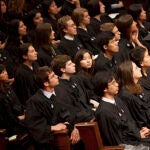 In Baccalaureate Address, Faust tells students they are prepared to handle turbulent future

In a time of global change and uncertainty, Harvard continues to support, encourage, challenge, and prepare its students to face times of calm and crisis and help them to understand that “life never follows a script,” Harvard President Drew Faust told the College’s Class of 2010 on Tuesday (May 25).

Faust’s remarks in the Memorial Church were part of the annual Baccalaureate Address, a Commencement week ritual dating to 1642 that gathers seniors for an informal farewell from the University’s president and the clergy.

In her speech, Faust recalled the words of Robert F. Kennedy, who addressed South African students in 1966 who were fighting to end apartheid. Kennedy, said Faust, told those students that they lived in times of danger and uncertainty, but also in times of great possibility.

On the hottest day of the year, the young men and women poured into the sweltering Memorial Church, dressed in their traditional black caps and gowns for their Harvard farewell.

The time-honored ceremony included readings from Hindu scripture, the Holy Quran, the New Testament, the Hebrew Bible, and the Analects of Confucius. In addition, there were comments from the Rev. Peter J. Gomes, the Plummer Professor of Christian Morals and Pusey Minister in the Memorial Church.

As is customary, Gomes was stationed at the church’s front steps and welcomed the seniors, who processed in a long line that snaked through the Old Yard. He greeted them with a solemn nod or friendly word.

Faust said that changes at Harvard, ranging from the reforms in its financial aid programs to the successful introduction of a new undergraduate General Education curriculum, combined with a changing global landscape, provided lessons for the seniors that were “too important to forget.”

“If Harvard graduates were writing the book on it, someone once said, the title would have to be ‘Humility and How I Achieved It,’ ” Faust joked. But, she added, “humility, in fact, is what makes learning possible — the sense of ignorance fueling the desire to overcome it.”

Reiterating her “parking space theory of life,” Faust encouraged the seniors, in her second lesson, to be risk takers and aim for goals where they can do what they love.

“Don’t park 10 blocks away from your destination because you think you’ll never find a closer space. Go to where you want to be. You can always circle back to where you have to be.”

The students were well aware of her third important lesson, she said, that “the world really needs you,” acknowledging that they had already developed “a deep sense of obligation” through extensive humanitarian work and volunteer efforts.

“You need to be the authors, the entrepreneurs, of your own lives,” offered Faust as her final lesson. “And this part I don’t have to tell you either. You are already doing it,” she said, referring to student projects such as a nonprofit group that built a girls school in Afghanistan. She also mentioned a soccer ball, born out of an engineering class assignment, that “can store energy and convert a playground ballgame into a power source for people in developing nations.”

“Keep asking the big, irrelevant questions; keep thinking beyond the present,” Faust told the students. “Then live what you have learned.”

Senior and Adams House resident Crystal Chang, a molecular and cellular biology concentrator who has plans to attend dental school, said Faust’s theme of embracing a life that doesn’t go according to a script is a message that everyone can appreciate.

“It was very encouraging and very inspiring at the same time,” she said.