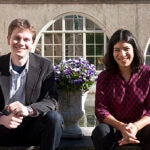 Lyle Ignace had been working for the Indian Health Service for years, providing care as an internist at a Navajo health facility in New Mexico and rising to the level of department head.

Though his patients were getting adequate care, he felt he didn’t know enough — whether about administration and health systems, or to provide leadership to improve the overall care of the Native American community.

“I was trained to treat the person in front of you,” Ignace said. “I came to realize I didn’t have the knowledge, skills, or tools to tackle those [broader] issues.”

Ignace’s search for that knowledge brought him to the Harvard School of Public Health.

Ignace is just the second member of Idaho’s Coeur d’Alene tribe to become a physician. The first is his father, Gerald, who is still practicing and to whom Ignace still turns for advice. Ignace said he became interested in medicine and passionate about the health problems facing Native Americans while watching his father work over the years.

Ignace, who received his M.D. from the University of Minnesota School of Medicine in 1996, took a one-year leave from his job at the Gallup Indian Medical Center, where he was chief of internal medicine, to come to Harvard. He received the Commonwealth Fund/Harvard University Fellowship in Minority Health Policy, which has had him making appearances and speaking to young people in addition to his studies.

Though returning to school after practicing for so many years was difficult, Ignace said that as Commencement approaches, there are still several classes he wished he’d been able to take. But he said the respite that the yearlong master’s in public health program provided him, together with the knowledge from the classes he took, have him ready to return to the daily battle to improve health.

“The last time I’d opened a biostatistics book was in medical school, so it had been awhile,” Ignace said. “But I’ve always been interested in developing new skills.”

Ignace said he is now considering several options within the Indian Health Service and could also return to Gallup. In all, he said, he wants to play a more active role in improving Indian health broadly.

When he thinks about the future, Ignace said he hopes to be able to look back on his career and know that he helped to bring Native American health to a par with that of the rest of the country. Native American communities today experience higher levels of a variety of ailments, including diabetes, childhood obesity, high blood pressure, kidney failure, drug and alcohol abuse, and lower life expectancy. There are interventions, he said, that could start making a difference in five to 10 years, though they might take longer to show up in statistics such as life expectancy.

“I’d like to think that native people have the same advantages as everyone else, the same health status, the same life expectancy as everyone else in the country,” Ignace said. “I’m really excited about the future potential of Indian health.”