An explosion of creativity 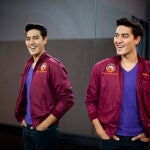 Looking for his big break

Diane Paulus sat perched on the back of a chair in a basement rehearsal space in Harvard Square on a recent afternoon, watching the scene play out before her like an entranced cat observing a mouse.

Springing from her seat, the diminutive director stopped the action to emphasize a line, solicit feedback from her actors, tweak an entrance, and perfect the use of a small prop.

Paulus was carefully preparing the ensemble for the American Repertory Theater’s (A.R.T.) final production of the year, “Johnny Baseball.”

The new musical, making its world premiere at the A.R.T., fuses fact and fiction with the infamous “curse” that surrounded the Boston Red Sox. The plot follows the intersecting lives of three main characters over a series of decades, addressing the realities of racism, and in particular the ball club’s troubling record on integration. The Red Sox were the last team in major league baseball to hire African-American players, only after having passed on greats like Jackie Robinson and Willie Mays.

Paulus calls the show a “deeply moving and intellectually stimulating work,” one she hopes will educate audiences about the team’s past while also showcasing a story of love, heartbreak, and redemption.

“It’s important for people to know the history of this town 50 years ago, and to be able to understand how we are moving forward from that. This show is not so much about looking backward as truly looking forward.”

Looking ahead, often in untraditional ways, while always keeping a keen eye on what has gone before, is what Paulus is all about. It’s at the heart of her mission to “expand the boundaries of theater” as the new artistic director of the A.R.T.

After a successful first season, the verdict appears to be a decided mission accomplished, and then some.

Fresh from a successful revival of the musical “Hair” on Broadway, the New York native took the helm of the A.R.T. and brought her characteristic kinetic drive to the post, developing a number of bold productions around the themes of Shakespeare and the past American century. The works, many of them highly stylized and unconventional, drew new and old audiences to the stage, and sometimes literally onto it.

As part of the “Shakespeare Exploded” festival, Paulus, in collaboration with the British theater troupe Punchdrunk, converted a nearby vacant school into a haunted theater space for “Sleep No More,” a reimagining of the Bard’s tragedy “Macbeth.” Theatergoers donned white masks as they wandered through a maze of transformed corridors and classrooms to follow the chilling action, largely absent of dialogue.

Paulus set “The Donkey Show,” based on Shakespeare’s “A Midsummer Night’s Dream,” in the opulent and over-the-top disco era of the 1970s. Glitter, glamour, and a pulsating soundtrack provide the backdrop at club OBERON, the A.R.T.’s theater space on Arrow Street, where the audience doubles as disco dancers on the club’s floor, amid the actors and the action.

Included in her inaugural season were Clifford Odets’ play “Paradise Lost,” about a family struggling during the Great Depression, and “Gatz,” a seven-hour theatrical reading of the entire text of F. Scott Fitzgerald’s “The Great Gatsby.”

“I wanted to make as bold a start to my time here as I could,” said Paulus. “We took our mission to the mat, which is to expand the boundaries of theater. What is so encouraging is that the audience met us more than halfway on this bold foray into a new way of thinking about theater.”

Her work and vision already have paid dividends, with many of her productions generating an almost frantic buzz and attracting countless repeat attendees. “The Donkey Show,” originally scheduled to end its run last fall, has been extended through this summer to accommodate the crowds. In addition, this year the A.R.T. sold more than 1,000 student passes, three times the number of previous years.

Paulus ’88 has broadened the theater’s reach in part by engaging directly with the community from which she came, working in tandem with Harvard professors to co-teach classes on campus and during the winter break developing a theater workshop for young undergraduates aspiring to careers in theater.

She sees interacting with the undergraduate community as a central part of her mission, calling students “the future of the theater.”

“We need to get them to understand that part of the enriching liberal arts experience is the A.R.T.”

Music, atypical theater spaces, and collaborations with the University community all play important roles in next season’s recently announced program, which will include the musical “Cabaret,” starring Amanda Palmer of Dresden Dolls fame, and what Paulus calls the rock protest musical “Prometheus Bound.” Also on tap are the opera “Death in the Powers,” a work being developed by the MIT Media Lab in partnership with the A.R.T. that will feature state-of-the-art robots, and a show currently in development that she hopes will operate as a type of theatrical scavenger hunt.

“To me, the mandate for every show is that it grabs the audience, intellectually, emotionally, in certain cases physically,” said Paulus. “Next year’s season will definitely offer that exciting range.”

To view next season’s schedule.