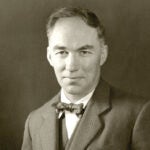 Dr. Pope was born in Cleveland, Ohio, on January 23rd, 1915. His natural intellectual talents, curiosity and drive, led him to pursue and complete, with distinction, the best education available: Milton Academy 1932, Harvard College 1937, and Harvard Medical School 1941. In 1946, after postgraduate training in pathology and biochemistry at the Children’s Hospital-Boston, the Massachusetts General Hospital, the Harvard Medical School Department of Biological Chemistry, and the Montreal Neurological Institute, he was recruited to the staff of McLean Hospital. There he became one of the world’s most eminent neuropathologists and served the institution brilliantly for more than six decades.

Throughout his life, Alfred Pope never forgot his debt to his distinguished mentors: A. Baird Hastings Ph.D., Chairman of the Department of Biological Chemistry at HMS; Sidney Farber M.D., Pathologist and Chairman of the Division of Laboratories and Research at Children’s Hospital; Stanley Cobb M.D., Bullard Professor of Neuropathology and Chief of the Psychiatric Service at MGH; and Raymond Adams M.D., Chief of the Neurology Service and Bullard Professor of Neuropathology at the MGH.

At the end of the Second World War, the US government instituted federal programs to fund opportunities for advanced medical research based on the success of the recent military research funding which had helped win the war. The chairman of the Board of Trustees of the Massachusetts General Hospital, Francis C. Gray, and Ralph Lowell, trustee of the McLean Hospital, aware of the McLean research tradition exemplified by the psychological research of the 1890s and the biochemical research of Otto Folin (later appointed the first professor of biological chemistry at Harvard Medical School in 1908) in the early 1900s, decided to establish the Biological Research Laboratory on the McLean campus in 1946 and recruited Jordi Folch Pi, M.D. and Alfred Pope M.D. as its leaders.

The measure of the determination of McLean’s leaders to enhance McLean’s scientific and academic activities can be gleaned from the fact that much of the funding for the construction of the laboratory came from money saved during the war by the then director, W. Franklin Wood M.D., for the purpose of improving the patients’ buildings.

Alfred came to McLean and worked diligently for six decades during which he was deeply devoted to two things:

The first was Maria Lorenz, a beautiful and talented psychiatrist with a brilliant intellect whom he met at McLean. Alfred and Maria had an unshakable marriage of both hearts and minds that sustained their love for almost 50 years. They shared a deep love of music and faithfully attended the weekly concerts of the Boston Symphony Orchestra.

The second area to which Dr. Pope was devoted was scientific research. He tried to find neurobiological mechanisms that could help us understand and treat devastating mental disorders, such as schizophrenia. He developed a novel method for measuring the chemical composition of very small samples of human brain that made it possible to observe discrete subregional changes in the cellular and chemical composition of the human brain.

Dr. Pope was one of the first to recognize that the dorsolateral prefrontal cortex was much more intricate in humans than in subhuman species. He believed that this difference was not only crucial to high level cognitive function but also to the pathology of psychiatric illness. He has been proved right in studies of psychotic and affective disorders. Alfred Pope was the first to observe a reduction in the number of cholinergic neurons and the activity of choline acetyltransferase in Alzheimer’s disease and other late–life dementing illnesses. These discoveries led to the therapeutic administration of anticholinesterases to increase cholinergic neurotransmission. This continues to be one of the mainstays in the treatment of the Alzheimer type dementias.

Alfred may have been one of the last “gentlemen scientists.” He worked on projects that were small– not in their importance, but in their need for funding resources. He did not lead a large team of scientists nor did his work require large and expensive equipment. His work was typically precise, deliberate and complex requiring long hours of individual effort. While his bibliography may not have been long, his publications were of considerable significance.

He reached out to young investigators and provided them with encouragement and mentoring. He and Maria had lunch most days in the hospital cafeteria where he would interact with junior faculty who would tell him about their recent findings and their ideas about future projects. Many significant results were analyzed and promising studies planned at that table. Young investigators would also drop in to see him at his office where he would help them with the design of their studies and the interpretation of their data. He was a scientist to the core, in spite of his standard garb consisting of a dark three-piece suit and a traditional striped tie. His very dignified appearance and demeanor belied the fact that he loved working in the laboratory as a creative bench scientist working at the cutting edge of his field. Whenever he met a colleague or a friend he was warm, animated and full of novel and interesting information.

Alfred had two other passions: the Harvard Medical School and McLean Hospital. He was deeply grateful, interested in and loyal to both these institutions and contributed to them in important ways.

At HMS he became a member of the Medical Library Committee, beginning in 1964, and served as chairman from 1970 to 1983. He also served on the Joint Countway Library Committee from 1970 to 1983. During his tenure, either as a member or chairman of these committees, Alfred was acutely aware of the importance of these libraries and of the Boston Medical Library to the medical community and worked diligently and effectively to improve the relationship between them during difficult periods. He served on the HMS Committee on Admission of Students from 1965 to 1970, and on at least fifteen Ad Hoc Committees to evaluate promotion to Professorship at HMS [chairman of seven]. Dr. Pope was Chairman of the Executive Committee of the Department of Neurology at the Medical School from 1970 to 1983. Alfred Pope remained active as an HMS alumnus and chaired his 60th reunion. In 2002, after his wife Maria died, he established at HMS the Alfred and Maria Lorenz Pope Research Fund to support basic research for the advancement of knowledge concerning the function of the human cerebrum in health and disease. In appreciation of Alfred’s generosity, the Dean of HMS, Dr. Joseph Martin, presented him with a beautiful, crystal sailing boat in recognition of his lifelong interest in sailing. As a child Alfred spent the summers at Christmas Cove in Maine where he loved to sail and throughout his life he collected sailing magazines and studied the different kind of boats depicted.

At Mclean Hospital Dr. Pope occupied a number of leadership positions, including the chairmanship of the Research Committee from 1963 to 1996, and chairman of the Human Studies Committee [1965-1973]. In 1977, the Mailman Research Center was dedicated, and the original Biological Research Laboratory, was named the Ralph Lowell Laboratory with Alfred Pope as its first Director, serving until he retired in 1983.

Alfred Pope’s contributions to the hospital went beyond these named positions. Throughout the years, the leaders of McLean Hospital relied on Alfred’s excellent judgment, sensitivity, intelligence, common sense and loyalty to formulate plans for growth, development and diversification. These characteristics were fully displayed and enormously helpful in two of the HMS Ad Hoc Committees, mentioned earlier which were appointed to select the hospital Psychiatrist in Chief in 1972 and 1984. He influenced major events in his own quiet way through civil and intelligent discourse, never engaging personally in the sometimes ugly aspects of academic and institutional politics. In gratitude to him McLean Hospital established in 1992 the Alfred Pope Award for Young Investigators. And, on December 12th 1996, the Trustees of the hospital voted to express “their deep appreciation to Dr. Pope for his half-century of distinguished service as a researcher and educator and their gratitude for his continued contributions in research and training.”

On the national stage, Dr. Pope served on the Editorial Boards of several distinguished professional journals including the Journal of Neurochemistry, Neurology, and the Archives of Neurology. He served on countless national committees of scientific organizations and universities and on several Study Sections of the National Institutes of Health. He was a lifetime member of many professional and honorary societies, including the American Association for the Advancement of Science, the distinguished American Academy of Arts and Science, and the New York Academy of Sciences. Together with other scientists in the Boston area, Dr. Pope was the prime mover in creating the Society for Neuroscience. Dr Pope was the principal author of more than 60 scintific papers and three books.

After his official “retirement” in 1983, Alfred continued to do research, teach and occupy his office at McLean, but his later years were clouded by the fact that his book, his magnum opus, The Human Dorsolateral Prefrontal Cortex, summarizing a lifetime of his scientific progress, scholarship and thinking, had not been published. This was due to a number of factors, including the fact that Alfred was a perfectionist who was  always improving the text to include more up to date information before submitting the manuscript for publication. Sadly, as the years went by, his ability to do this diminished. Eventually, with the assistance of several of Alfred’s colleagues and friends at McLean, including members of this Memorial Minute Committee, the book was published in 2008. The book, reflecting the integration of his life and work, is not just an exceptional tour of the part of the brain which makes us most human, but a remarkable example of the clear and precise scientific thinking of one great human mind. When Alfred’s book was published and presented to him he was overwhelmed with emotion and gratitude.  He said “Thank you, thank you I thought this moment would never come.”

After Maria died, Alfred continued to live at Fox Hill Village. Even as conversation became more difficult, his curiosity and interest in happenings at McLean and Harvard Medical School were undiminished. He enjoyed reminiscing about past events he had been involved in and often Alfred’s subdued sense of humor surfaced.

When Alfred died on February 13th, 2009, we lost not only a great scientist, a colleague, and a friend but a true and remarkable gentleman.