Truths and myths on marijuana 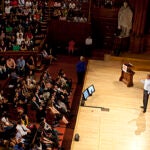 Gates on giving, getting, sharing

Possession of less than an ounce of marijuana can no longer lead to criminal charges in Massachusetts, but it can lead to suspension from Harvard University. This was just one of the issues discussed at a no-holds-barred Winthrop House event this week.

Sponsored by Harvard University Health Services’ (HUHS) Office of Alcohol & Other Drug Services (AODS), and organized by the Drug & Alcohol Peer Advisers’ Community Education & Outreach subcommittee, the event provided a forum for students to ask questions about many aspects of marijuana use — from legal risks to the effect on one’s physical and mental health.

“I’m from Massachusetts, and was completely unsure where the law now stands on marijuana, so it was good to come here and learn the facts and how you’ll be affected legally,” said Harvard freshman Melanie Comeau.

Massachusetts State Police Sgt. Richard J. Crosby Jr. provided a legal overview of marijuana in the state. Aimed less at zero-tolerance and more on controlling dangerous behavior, the law dictates that possessing an ounce or less of marijuana is now a civil offense that carries a fine of $100 and forfeiture of the contraband.

In addition to the fine, anyone under age 18 caught with marijuana is required to attend a drug awareness program, and anyone found with more than an ounce will be charged with a misdemeanor that carries a possible sentence of six months and a $500 fine. Harvard prohibits use or possession of any illicit drug on campus.

Ranna Parekh, a psychiatrist at HUHS and Massachusetts General Hospital (MGH), said car accidents are the No. 1 killer of people ages 15 to 24. “We often think of alcohol when we hear that statistic, but you also need to consider marijuana. It delays your reflexes; it delays your capacity to make quick assessments. Misuse includes when you use it and you get behind the wheel of a car, or you get into a car with a driver who has used it.”

Parekh, who has worked in MGH’s addiction clinic, spoke of what is known about marijuana’s physiological effects. “Marijuana works by increasing the brain’s neurotransmitter dopamine. People often think it will help them to concentrate, when in fact it decreases that ability and can affect the memory,” she said. “It’s an important thing to think about, particularly now as students are entering final exams.”

Although marijuana use isn’t the top concern in her field, Parekh cautioned students to be mindful of what it can do to the body. “People in my profession don’t ask about marijuana use. It’s way down the list after alcohol, cocaine, pills, heroin,” she said. “The problem is that we’re missing warning signs in many people who present with depressive issues,” Parekh added. “Research shows that those who use marijuana earlier in life have a higher risk of developing depressive problems later on.”

AODS planned the event after an equally successful turnout at last fall’s session on study drugs. The organization plans to continue holding such educational forums for students in the upcoming school year, to provide important information on a variety of drug issues.

Crosby reminded the crowd to consider all the facts about drug consumption and its effects, and to remember that researchers still don’t know everything about marijuana’s long-term medical impact. “You kids will absolutely be the leaders of the world,” he said. “What you do will have a big impact.”