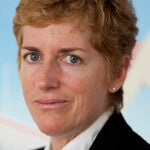 Award-winning historian Annette Gordon-Reed, J.D. ’84, will become a professor at Harvard Law School (HLS) and a professor of history in the Faculty of Arts and Sciences in July. She also will become the Carol K. Pforzheimer Professor at the Radcliffe Institute for Advanced Study.

Gordon-Reed — recipient of the National Book Award, the Pulitzer Prize in history, and a National Humanities Medal — comes to Harvard from the New York Law School, where she was the Wallace Stevens Professor of Law, and from Rutgers University, Newark, where she was the Board of Governors Professor of History. She served as the Charles Warren Visiting Professor of American Legal History during the fall of 2009 at Harvard Law School. During this spring term, she served as a visiting professor of law at New York University School of Law.

Gordon-Reed said, “I am enormously pleased to become a part of the Harvard community once again. I look forward to working with the students and faculty members at the Law School and in the History Department, and to experiencing the rich interdisciplinary environment at the Radcliffe Institute.”

“I celebrate the fact that Annette Gordon-Reed has accepted our invitation to join the Harvard Law School faculty,” said Dean Martha Minow. “Her extraordinary scholarship combines intensive archival research, brilliant lawyerly analysis, and tremendous historical imagination, as well as a gift for writing riveting prose. Long proud of our own graduate, we here at the Law School are delighted she will join our faculty and also participate in the life of the University through affiliations with Radcliffe and the History Department. Colleagues, students, and aspiring scholars rejoice over the chance to work with her as she deepens historical understanding of law, slavery, and the human experience.”

Barbara J. Grosz, dean of the Radcliffe Institute for Advanced Study, said, “I’m thrilled that Annette Gordon-Reed will join us as the Carol K. Pforzheimer Professor at the Radcliffe Institute.” Reflecting on Gordon-Reed’s interest in the institute’s cross-disciplinary community of scholars, scientists, and artists, Grosz said, “I very much look forward to her participation in the institute’s Fellowship Program and the activities of our Academic Engagement Programs.”

“I’m very pleased that a scholar of Annette Gordon-Reed’s ability and depth will be joining the History Department,” said Michael D. Smith, dean of the Faculty of Arts and Sciences. “And I am excited that Harvard College students will have the opportunity to learn directly from an award-winning historian and renowned legal scholar.”

Gordon-Reed is the author of  “Thomas Jefferson and Sally Hemings: An American Controversy” (1997), which examines the scholarly writing on the relationships between Thomas Jefferson and Sally Hemings. The book was a finalist for the annual Library of Virginia Awards. Gordon-Reed’s most recent book, “The Hemingses of Monticello” (2008), which traces the lives of four generations of a slave family, won numerous awards, including, in addition to the National Book Award and the Pulitzer, the Society for Historians of the Early American Republic Book Award, the George Washington Book Prize, the Anisfield-Wolf Book Award, the New Jersey Council of the Humanities Book Award, the Frederick Douglass Book Prize, the Library of Virginia Literary Award, and the Southern Historical Association Owsley Award. The book was also a finalist for the 2009 National Book Critics Circle Award. Two more books, “Jefferson: A Reader on Race” and “Andrew Johnson,” are forthcoming.

Gordon-Reed is also the co-author of “Vernon Can Read!: A Memoir” (2001), which was written with Vernon Jordan Jr. and received the Anisfield-Wolf Book Award. She is editor of “Race on Trial: Law and Justice in American History” (2002).

Gordon-Reed is a member of the Council of Foreign Relations. Prior to becoming an academic, she was counsel to the New York City Board of Correction from 1987 to 1992. In this capacity, she helped to formulate policies, grievance procedures, and legislation affecting inmates. After graduating from HLS, Gordon-Reed was an associate at Cahill Gordon & Reindel in New York.

While a student at Harvard Law School, Gordon-Reed served as an editor for the Harvard Law Review. In addition to her J.D., she holds an A.B. from Dartmouth College in history and an honorary doctor of letters from Ramapo College. She will receive an honorary degree from the College of William & Mary in mid-May.