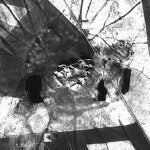 Getting a bird’s-eye view of the past

Questions abound on effects of climate change on atmosphere

Rising global temperatures could cause the vast Amazonian rainforest — sometimes viewed as the lungs of the Earth — to give off significant carbon dioxide, worsening the climate-changing problem of greenhouse gases in the atmosphere, Deborah Clark, an authority on tropical forests, told the group gathered for the Sixth Annual Harvard Plant Biology Symposium on April 29.

The event, “Trees and the Global Environment,” was hosted by the Plant Biology Initiative and organized by Harvard’s  Noel Michele Holbrook, the Bullard Professor of Forestry, and Stuart Davies, director of Asian programs at the Arnold Arboretum.

Clark, a researcher at the University of Missouri-St. Louis, said temperature observations have shown a quarter-degree Celsius rise in tropical temperatures for each of the last three decades. Most worrisome, however, is that the photosynthetic process that drives the consumption of carbon dioxide by trees begins to decline when temperatures get too high. In that case, the trees’ respiration — in which carbon dioxide is emitted — becomes greater than the carbon dioxide uptake in photosynthesis.

“Tropical climate has already started changing, quite strongly and quite rapidly,” Clark said. “Conditions for tropical forests into the future are going to become more stressful.”

“There’s a recognition — certainly at the Arboretum — that understanding the whole spectrum of how forests and trees interact with the environment hasn’t been addressed so well,” Davies said.

The two-day event, held at the American Academy of Arts and Sciences in Cambridge, Mass., brought together researchers with a wide range of expertise, including computer modeling of how trees fit into the global environment, tree physiology, population biology, and community scale interactions.

Clark said that people tend to discount the importance of trees and plants and their role as the foundation of the ecosystem. Tropical forests alone, for example, hold 25 percent of the carbon in the terrestrial biosphere and process enormous quantities of carbon daily. Further, the natural world, mainly through plants and the ocean, has been humanity’s ally in the fight against climate change, storing away about half of the carbon dioxide humanity has emitted, said Clark.

Clark said she is most concerned about the effect of climate change on lowland tropical forests, which grow in places that already have high temperatures. A continued increase in temperatures could push these trees past the tipping point where the carbon dioxide taken in through photosynthesis drops below that lost in respiration, making them net carbon dioxide emitters. One study showed that tipping point to be about 28 degrees Celsius, or 82 Fahrenheit. Another study showed that the average temperature in the Costa Rican rainforest she studies reaching that point by 2020, meaning much higher temperatures in the daytime, as well as higher nighttime temperatures.

Hand in hand with higher temperatures comes the fear of increased drought.  Though the trees are adapted to periodic such conditions, severe droughts can reduce leaf area and kill off trees, Clark said.

“We’re quite concerned about … how warming is going to impinge on these forests,” Clark said.

One caveat on those fears, Clark said, is the possibility that higher CO2 levels will have a fertilizing effect on the trees, allowing them to withstand less favorable conditions. Though there is hope of a fertilizer effect, her studies haven’t detected one.

“I’d say there’s no evidence of a CO2 fertilization effect coming to the rescue,” Clark said.

One potential area of positive news could be nearby, in the Harvard Forest. Steven Wofsy, the Rotch Professor of Atmospheric and Environmental Science, discussed results of his own studies at the forest in Petersham, as well as in the Amazon.

Wofsy said the Harvard Forest, which has been studied for decades, continues to grow, taking up carbon dioxide as it does. Like much of the forest covering New England, the original forest was cleared for farmland in earlier centuries and is growing back. Harvard Forest is a transitional forest, affected by a variety of factors, some climactic, some not.

The forest, he said, was pasture in the mid-1800s, then abandoned between 1830 and 1890. Even as it has grown, the forest has experienced many shocks, each of which can open the area to tree regrowth. Gypsy moth infestations and ice storms have killed trees, opening the canopy for new trees. The legacy of past pollution like acid rain and the land’s farming history are likely also at play as the forest continues to mature and deadfall accumulates, holding carbon until it decomposes.

Another possible factor, Wofsy said, is that the forests’ growing season has increased since he began studying it in 1990, rising from between 100 and 135 days to closer to 145 to 150 days.

Wofsy said forest growth in April is vigorous enough that it takes up carbon dioxide overall, something it didn’t do years ago. With warmer temperatures, the evergreen white pines in the forest can kick right into action, while the deciduous trees are still putting out their leaves.

Temperatures have climbed about three-fourths of a degree Celsius, something else that would affect the trees.

Wofsy’s Amazonian studies haven’t provided answers as dramatic. His measurements indicate hopes that the Amazonian forest would be a sink of carbon dioxide, removing excess from the atmosphere to sequester in tree trunks, roots, and leaves, do not bear fruit. Instead, he said, they show a near carbon balance.

“You hardly ever see anything where the Amazon is sucking CO2 out of the atmosphere. It just doesn’t do that,” Wofsy said.

Wofsy said the future carbon dioxide uptake of the Amazonian and New England forests can’t be predicted at this point.

“I really think nobody knows what a forest like Harvard Forest can be under current conditions,” Wofsy said.