The tale of the two-sport athlete 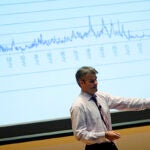 Taking finance up the Red Line

When you love something, sometimes you just can’t let it go. For Melanie Baskind ’12, that something was lacrosse.

Baskind was voted Rookie of the Year in soccer by the Ivy League in 2008, and was a critical force behind the Crimson’s two consecutive Ancient Eight titles and two NCAA tournament appearances. But the truth is that soccer was just one of her loves.

Named the 2008 Boston Globe Athlete of the Year, the Framingham, Mass., native starred in three sports in high school (soccer, lacrosse, and hockey), but when she arrived at Harvard, she chose to focus on soccer to start.

“It definitely was a soccer thing for me,” said Baskind. “A lot of schools would contact me, not really knowing I played the other sport. But I always knew that soccer was going to be my focus, and I didn’t want to commit to playing lacrosse before I got here and figured out what my situation was going to be on the soccer team and academically.”

Helping the Harvard women’s soccer team to a 13-3-5 record, Baskind finished seventh in the Ivy League in scoring and tied for fifth in goals and assists. In addition to being honored as the league’s top newcomer, she was named second-team All-Ivy League and tabbed on Soccer Buzz’s Freshman All-America third team.

After her first soccer season, the versatile Baskind had a decision to make. She could either put aside her shin guards and pick up her lacrosse stick, or the neurobiology concentrator could take the season off, revisiting the decision as a sophomore.

“It was all about soccer last season, and in the preseason [last year] I wasn’t really thinking about lacrosse,” she said. “I was going back and forth about whether it was something that I wanted to do, and ended up deciding it wasn’t a good time for me to do it last year, for a bunch of different reasons.”

Upon completing her second championship soccer season this year, Baskind again considered returning to lacrosse and decided that, with a year under her belt, it was time.

“My situation with school changed a little bit. I was more comfortable with my position on the soccer team,” she said.

After talking to head coaches, assistants, and captains of both teams to make sure everyone knew where she was coming from, the encouragement she received was enough to ease her concerns about coming back to lacrosse.

“I was grateful that both sides have been very supportive with whatever decision I decided to do, last year and this year, and it definitely made it easier.”

In retrospect, her joining the team turned out to be a bigger deal than first expected. In the second game of the season on March 6, Harvard saw junior midfielder Jessica Halpern — the team’s leading scorer from a year ago — go down with a season-ending injury. It was a devastating blow for the team, but it also meant that Baskind would have to come in and contribute right away. That is something she has had no problem doing. She is second on the team in goals and points, and tied for first in assists.

“I think, in some ways, Jess is irreplaceable on the field. I think what Melanie added right away was the big-game experience that she carried over from soccer,” said Lisa Miller, who is in her third year coaching Harvard. “I would have loved to have them both on the field at the same time, but it was definitely a gift to have Mel with that experience, versus a freshman who isn’t gamed-in.”

As Harvard enters the heart of its schedule, jockeying for positioning in the Ivy League standings, Baskind has quickly found herself a core team member in two sports she loves.

That love is something that makes feasible the challenge of balancing two athletic seasons, everyday friendships, and a demanding academic workload. “It’s a ton of sacrifices,” she said. For instance, Baskind had to stay in Massachusetts over spring break while the soccer team traveled across Italy.

“I’ve really enjoyed the experience, and I’m willing to make sacrifices for that. I think my friends have been great about understanding a lot of social stuff I’ve had to miss out on, which I knew was going to happen, coming into it. I think the soccer team has been great about understanding that I’m not going to be able to go to as many team functions as I could have been.”

Despite the sacrifices, her coach notes that she always has a smile.

“I think one of the things Mel brings to practice is a sense of humor, and she has fun, even in the middle of a game. Very rarely can a player make me laugh when my team is not doing well,” said Miller. “I think the players who play two sports generally like to play, like to compete. They like the camaraderie of being part of the team, and Mel definitely brings that.”

And so as Baskind shares her fun-loving attitude with her new team, it is clear that her year’s absence didn’t diminish her passion for the sport.

“She just likes to play, and I think that’s contagious, and it rubs off on other people, and it definitely rubs off on the coaching staff,” said Miller.