Teaching as ‘a secular pulpit’ 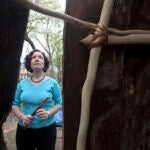 Living the lessons we have learned

When David Damrosch was in ninth grade, a teacher gave him a copy of the novel “Tristam Shandy” because she thought it would appeal to his sense of humor. “I was blown away by it,” he said. “Tristam talks at one point about his favorite writers, and if he’d said Defoe and Chaucer, I probably would have become an English professor like my older brother Leo, who’s on the faculty here.”

Instead, Tristam mentioned “my dear Rabelais and my dearer Cervantes.” Damrosch, just 15 at the time, thought, “I don’t know who these guys are, but if Tristam likes them, I’ll like them too.” He went out and bought some Penguin Classics and “fell in love with the broader panorama of literature.”

He especially liked satirical novels, so when he saw “The Divine Comedy” listed in the back of one of those Penguin Classics, he went out and grabbed a copy. “I soon found Dante wasn’t quite the thigh-slapper I was expecting,” he said, “but I was hooked.”

By the time he arrived at Yale as an undergraduate, his interests had expanded beyond European literature to ancient languages and cultures. “I’m a preacher’s kid with Jewish roots in the family,” said the Episcopal priest’s son, “so I was interested in the Bible.” He also had a roommate who signed up for an Egyptian archaeology course, to which Damrosch tagged along. “I was really interested in languages,” he said, “and thought: Here’s a chance to learn a language that doesn’t work like the languages I know.” He eventually dipped his toes into Middle High German, Old Norse, and Aztec poetry, finding that once he fell in love with the literature, he tended to want to learn more about the language. He has studied 12 languages, so far.

“The most interesting case was the Nahuatl language” spoken by the Aztecs. “In graduate school, I found the language was being offered in the anthropology department. The class’s enrollment doubled when I signed up, and my director of graduate studies in comparative literature threatened to throw me out the window when I asked for course credit.”

The adviser, he adds, thought “some hiring committees might feel I was just doing arabesques around the literary tradition.”

At the time, he wasn’t sure whether he’d go into academia or become a writer or Foreign Service officer. The path he ultimately chose has provided the best of all three worlds, allowing travel and immersion in foreign cultures, time to write, and the chance to open the world of comparative literature to young people.

His most recent title was “The Buried Book: The Loss and Rediscovery of the Great Epic of Gilgamesh,” and he’s at work on another popular nonfiction title about the cultural history of the conquest of Mexico.

After spending almost three decades at Columbia University, in his hometown of Manhattan, Damrosch decided to make the move to Harvard when the department invited him to help with its new, more global focus. “In terms of being at Harvard,” he said, “it’s both a matter of helping build a more global department and also integrating the undergrad literature concentration and the graduate comparative literature program. We’ve now created a truly unified department that I think represents global comparative literature better.”

It didn’t hurt that his older brother, Leo Damrosch, has been at Harvard since 1989, or that his middle brother, Tom, is a parish priest in western Massachusetts, but scholarship was the real draw.

“Every quarter century or so, it’s nice to try something fresh,” he said. “I felt there was a chance to do some innovative work here with some very, very collegial colleagues and excellent students.”