Taking finance up the Red Line 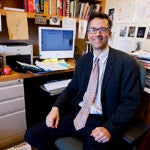 Blyth, a Harvard statistics Ph.D. who is managing director of HMC’s internal investment team, joined the company four years ago. In addition to his investing duties, he had hoped to resume teaching, something he had last done as an instructor at Imperial College London in the early ’90s. But the time wasn’t right. HMC was in the midst of a leadership change, and then was aggressively managing the impact of the international financial crisis.

This year, the time is finally right. Blyth is teaching statistics 123, “Applied Quantitative Finance on Wall Street.” The class introduces statistics and applied-math students to modern financial markets and to the statistical tools involved with them. Blyth draws lessons from his own experiences — some from the same day — and from broader financial topics, such as the factors that led to the recent global financial meltdown.

“A lot of the course is distilled out of problems that I encountered over the last 15 to 20 years working on Wall Street,” Blyth said recently in his HMC office in the Federal Reserve Bank building. “When I’m not teaching, I’m over here buying and selling the things I’m talking about in class.”

Statistics Department Chair Xiao-Li Meng, the Whipple Jones Professor of Statistics, said Blyth’s experience is a plus for students because it shows the importance of statistical analysis on everyday finance.

“Stephen’s extensive experience on Wall Street, combined with his ‘Main Street’ training as a Ph.D. statistician, puts him in an ideal position to showcase to students the impact of rigorous quantitative reasoning — or lack of — on financial markets,” Meng said.

Blyth grew up in North London and attended Cambridge University, receiving his bachelor’s degree in mathematics in 1988. He came to Harvard’s Statistics Department in 1988 and graduated in 1992. After a yearlong postdoctoral fellowship at Imperial College London, Blyth was a statistics lecturer there for a year.

Around that time, Blyth said, he was pondering his future and figuring out a way to get back to the United States. He ran into two roommates from graduate school, theoretical physicists who had scrambled for work when Congress canceled the superconducting supercollider, the gigantic atom smasher that had been planned for Texas. They both wound up in finance and told Blyth that the field contained interesting problems.

Blyth began to explore opportunities in finance, taking a job as a junior trader for HSBC Bank. Without a finance background, he struggled at first and was considering returning to academia when things suddenly “clicked” for him. After that, Blyth found himself not only intrigued by the complexity of the problems he faced, analyzing derivatives for investment opportunities, but he was enthralled by the dynamism of the trading floor, where money was made and lost every day.

He moved to New York with HSBC and then took a position with Morgan Stanley, eventually becoming a managing director. From there he moved to Deutsche Bank, where he worked until coming to HMC.

Before joining HMC, he noted that then-HMC President Mohamed El-Erian was teaching at Harvard Business School, so he contacted Meng to explore the possibility of teaching in the Faculty of Arts and Sciences’ Statistics Department.

“I really enjoyed being on Wall Street — the mathematical complexity, the real-time nature, the dynamism — but there was always something missing, in terms of the intellectual mission,” Blyth said.

“Stephen Blyth is a very talented investor, a devoted Harvard alum, and an adept manager and mentor in his role here at HMC,” Mendillo said. “I’m delighted that he has the opportunity to share his enthusiasm for statistics and his world-class skill in finance with Harvard students, whose education, after all, is the reason for what we do. This collaboration not only brings the student experience closer to HMC’s trading floor, it also highlights another dimension to HMC’s role in the broader Harvard community.”

There are about 85 students in the class, Blyth said, covering a broad spectrum of ages and academic experience, from freshmen to statistics graduate students. Some students have little financial experience, while others have interned on Wall Street, he said.

“I’ve really enjoyed it. It’s a very good introduction to the practical applications of math on Wall Street,” said Sumit Malik, a freshman considering a concentration in applied math or economics. “It’s very helpful to get that inside perspective, but it’s also valuable to see how what we’re learning is used.”

Taylor Yi, a junior statistics concentrator, said the course matches his interest in finance well. He particularly likes that, for part of the class, Blyth puts on a trade (though not with real money) using platforms at HMC and Deutsche Bank so students can see how it is done in the real world.

Blyth said getting back to the Yard has reminded him of his days as a student, when he was a resident tutor at Winthrop House and started the Graduate School of Arts and Sciences soccer team.

“Teaching reminded me of all the great things Harvard has to offer, particularly the students,” Blyth said.