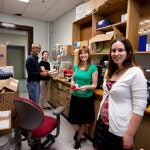 From lab trash to treasure

A tobacco company’s new, dissolvable nicotine pellet–which is being sold as a tobacco product, but which in some cases resembles popular candies–could lead to accidental nicotine poisoning in children, according to a new study from the Harvard School of Public Health (HSPH), the Northern Ohio Poison Control Center, the Centers for Disease Control and Prevention (CDC) and the Food and Drug Administration (FDA). The researchers also say the candy-like products could appeal to young people and lead to nicotine addiction as well.

The study appears in an advance online edition of the journal Pediatrics on April 19, 2010 and will appear in a later print issue.

It appears that the product is intended as a temporary form of nicotine for smokers in settings where smoking is banned. However, the potential public health effect could be disastrous, particularly for infants and adolescents, said Professor Gregory Connolly, lead author of the study and director of the Tobacco Control Research Program at HSPH.

Ingestion of tobacco products by infants and children is a major reason for calls to poison control centers nationwide. In 2007, 6,724 tobacco-related poisoning cases were reported among children five years of age and under. Small children can experience nausea and vomiting from as little as 1 mg of nicotine.

“This product is called a ‘tobacco’ product, but in the eyes of a 4-year-old, the pellets look more like candy than a regular cigarette. Nicotine is a highly addictive drug and to make it look like a piece of candy is recklessly playing with the health of children,” said Connolly.

The researchers computed, based on median body weight, how much nicotine ingestion would lead to symptoms of poisoning in children: A one-year-old infant could suffer mild to moderate symptoms of nicotine poisoning by ingesting 8 to 14 Orbs, 14 Strips or 3 Sticks; ingesting 10 to 17 Orbs, 17 Strips or 3 to 4 Sticks could result in severe toxicity or death. A four-year-old child could have moderate symptoms by ingesting 13 to 21 Orbs, 14 Strips or 4 Sticks and could suffer severe toxicity or death by consuming 16 to 27 Orbs, 27 Strips or 5 Sticks. The researchers report that a poison control center in Portland, Oregon, a test market for Orbs, reported a case in which a three-year old ingested an Orbs pellet.

R.J. Reynolds claims that Orbs packaging is “child resistant,” but the researchers say adults could unknowingly leave the pellets out in the open where children could easily access them. The researchers also say that the candy-like appearance and flavoring and ease-of-use of the product could appeal to children.