Reflecting on a young life 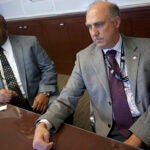 Program allows freshmen to step back and ponder larger questions about their time at Harvard, and beyond

There have been a few times this academic year when I’ve had to choose between finishing a problem set or spending time with my friends. It’s obvious that there is a certain “go, go, go” way of life at a world-class institution such as Harvard College. Because this is a university where top students flock to study because of their potential and accomplishments, it is easy to fill up a schedule with academics, extracurricular meetings, practices, and rehearsals, while at the same time not even realizing what we’re doing it all for.

As students, we share many interests. But as Harvard freshmen, more specifically, there are several high expectations that we set for ourselves. Everything we do, and have already done up until this point, seems only for the future, so that we can live “good lives.” But what exactly does that mean? Are our actions reflective of our values? Do we have certain responsibilities or obligations as Harvard students? When is it time to put that problem set down? These are a few of the big questions that my “Reflecting on Your Life” group discussed.

When I received the e-mail to sign up for the sessions, I was doubtful that a program like this would be successful, because of everyone’s busy schedules. After all, there aren’t even enough hours in the day to get a full night’s sleep, let alone squeeze in a voluntary activity that doesn’t count for anything academically. However, the section, intended especially for freshmen, only met for an hour and a half for three weeks, without any prerequisites or homework, so I decided to keep an open mind and go through with it.

Dean of Freshmen Thomas Dingman and Jonathan Smart ’12, who had participated in the program last year, made sure our discussion was running smoothly. After the first few minutes of our initial meeting, my classmates and I had found some common ground outside of academics. When asked why we signed up, we gave a variety of responses, from getting away from the traditional classroom setting to meeting new people. I think Shalini Pammal ’13 summed it up best, saying she simply wanted to listen to the perspectives of her classmates because “one of Harvard’s greatest resources is its students.”

While I anticipated awkward silences and blank stares, I was pleasantly surprised when I arrived at Dean Dingman’s home with the same 15 classmates each Thursday to sit in a circle and talk about life. My favorite part of this discussion group was that the people represented a cross-section of the Class of 2013; there was no criterion for selection other than what fit our schedules best when we signed up. Essentially, any connections we might have shared were by coincidence, which I enjoyed because our groups of friends here are largely dictated by where we live, those who play the same sport, or maybe those we see in our classes. For me, this means I met most of my friends across the hall in Greenough, on the volleyball team, and in first-semester classes, but none of them were in my “Reflecting on Your Life” section.

It was reassuring to know that I wasn’t the only one who was thinking about all the doors that attending Harvard had opened for me, about life back home in Methuen, Mass., or about what I wanted out of my college experience. Ultimately, I was thinking about my entire life.

I would recommend the program to anyone because it helped me to realize that I should seize all that Harvard has to offer, while I can. It solidified opinions of which I was uncertain, and I don’t think I could have articulated or even embraced them without the help of my classmates. But it also raised a new set of questions: Will we actually put the problem set down and go out to gain life experience every time we have the opportunity? Will we sacrifice that “A,” regardless of the fact that it doesn’t really matter 20 years from now? While these questions are up for debate, it’s nice to know that there are people who can agree that reflecting on our time here at Harvard, even if it’s only been a semester and a half, has been both meaningful and worthwhile.

An undergraduate or graduate student with an essay to share about life at Harvard? E-mail Jim_Concannon@harvard.edu.