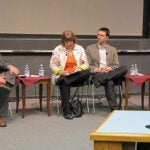 The status quo in the Middle East is “gloomy,” but doesn’t have to be. “We can do something about it,” Rima Khalaf told a Harvard crowd.

Khalaf, a onetime United Nations official who was once deputy prime minister of Jordan, is the first visiting scholar at the Harvard Kennedy School‘s Middle East Initiative. The April 5 talk was the first in a series of lectures she will deliver, titled “How Can Arabs Reclaim Their Future?”

Khalaf examined the challenges facing human development in the Arab world, along with ways those challenges can be met.

There have been significant advances, she said, including declining rates of illiteracy. (A decade ago, 40 percent of the Arab world was illiterate; today only 27 percent is.) More people are in school, and more are connected to the Internet (about 9 percent). Infant mortality rates have declined by two-thirds in the past 30 years, while life expectancy rose from 50 to age 67, the world average.

“But these achievements, important as they may be, should not blind us to what the numbers fail to measure,” said Khalaf.

She offered some examples: “How meaningful is higher Internet access if a civil servant can decide for you the sites you …  visit? How satisfied should a woman in Darfur be with a 10-year increase in her life expectancy when she can be forcibly displaced, violated, or raped?”

Additionally, Khalaf argued, the numbers leave out critical aspects of human development, including freedom from fear and oppression and marginalization. In terms of such freedoms and human dignity, she said, Arab states have “probably achieved the least.”

Palestinians forced to live under occupation are robbed of their freedom, said Khalaf, and most Arab nations lack important democratic elements, such as free and fair elections, an independent media, a vibrant civil society, and sound economic policies and investments designed to benefit average citizens, and not merely the select few.

The absence of democratic government leads to corruption and a lack of innovation, and harms economic competitiveness, she said. Khalaf also warned that rising poverty and unemployment in the area could produce a “combustible mix.”

“Arabs managed to varying degrees to free their people from hunger but not from fear,” said Khalaf. “They somewhat succeeded in building their people’s capabilities, but failed in providing them with the opportunities to utilize them. They enriched some, but marginalized many.”

A main source of the problems involves the empowerment of women, she said. Arab countries have made advances, and many women have succeeded regionally or individually. But, Khalaf added, “Much more needs to be done to extend empowerment from the few to the broad base of women.”

In the Arab world, “personal status laws” still legally sanction gender bias, said Khalaf. She argued that both societal and legal reforms are needed to bring men and women to an “equal footing,” and to guarantee a woman’s full rights of citizenship.

Overall reform in the region will guarantee human development, said Khalaf. It’s a step that is “necessary, desirable, and indeed overdue,” and needs to include political, social, and economic change. “I strongly believe that we the peoples of the region have the capacities, the resources, and the political will to undertake such a project.”

Khalaf’s next lectures will examine political reform and the development of knowledge societies in the Arab world. For more information.