Peering into gearworks of FDA 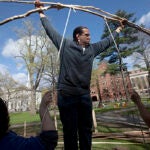 Topping off at 800 pages, “Reputation and Power: Organizational Image and Pharmaceutical Regulation at the FDA” is Daniel Carpenter’s opus.

Carpenter, the Allie S. Freed Professor of Government and director of the Center for American Political Studies, became fascinated with the Food and Drug Administration (FDA) 20 years ago “because the agency was always in the news and because its decisions were so controversial at the same time that the agency was so highly respected in scientific and popular circles.”

But Carpenter said the research on the FDA then was “incredibly simplistic. In these works, the FDA is either great or it’s horrible; it’s either purely altruistic or it’s power-hungry. A number of well-informed scholars and careful observers of the agency told me the same thing: namely, that previous treatments had oversimplified the agency. I wanted to step outside of those binary narratives.”

One of his approaches was examining the FDA’s reputation. “A big part of the FDA’s power comes from the way it is viewed by different audiences,” said Carpenter. “So I spent a lot of time not only in the records and archives of the FDA, but in the records of medical associations and researchers, drug companies, research hospitals like Mayo Clinic and M.D. Anderson, European and Indian drug regulators and health agencies, politicians, and Supreme Court justices, social movement organizations, and interest groups.”

Behind the scenes, much of what happens at “research universities around the world is dependent upon FDA rules, regulations, and discussions,” said Carpenter.

But what about the American people? Have they become disillusioned by dodgy pharmaceuticals and lawsuits?

“For the audience of the mass public, the FDA’s reputation is compelling because people believe that the agency has kept them safe, and that the FDA generally ‘gets it right,’” he noted.

“The most vivid event in building this reputation was FDA officer Frances Kelsey’s refusal to let thalidomide on the U.S. market,” he said. “When that drug was marketed in Europe and Australia, thousands of children were born with irreversible birth defects, and there were uncounted stillbirths and abortions.” (Kelsey’s photo is on the cover of the book.)

“The general public does, on the whole, trust the FDA, though not as much as it used to,” said Carpenter, who believes the next five to 10 years will be critical for the agency.

“Reputation and Power” also chronicles pivotal FDA decisions, from the 1980s AIDS crisis to oral contraceptives, to chemotherapy, to phased trials and manufacturing.

“This has been 12 years, over 100 archival collections, and three continents of research in the making,” said Carpenter. “I think my proudest moment came when Richard Merrill, a former FDA general counsel and the nation’s top legal scholar on drug regulation — and a tough critic — told me that the book was the best treatment of new drug regulation he had ever seen. From someone who lived it and studied it for decades, that was a nice endorsement.”