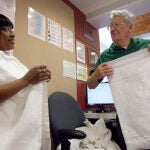 Oglesby Paul was a towering figure in the field of internal medicine and cardiology. He was born in Milton, MA and attended Milton Academy, Harvard College and Harvard Medical School.  After his training in internal medicine and cardiology, Paul took a fellowship with the best known cardiologist in the world, Dr. Paul Dudley White at Mass General Hospital and Harvard Medical School. In this role he saw patients with and for Dr. White; he helped in the annual course in cardiology for physicians from all over the world; and he learned the standards of physical examination and history taking that best underlay that specialty.

Oley left a promising career in Boston to move to Chicago. The next chapter of his career was a combination of private practice, teaching, and service at the Central Free Dispensary of Presbyterian Hospital, later Presbyterian-St. Luke’s Hospital, in Chicago.  He was a leader in clinical cardiology, answering consultations for some of the most distinguished citizens and “… making diagnoses that nobody else could.” When mitral valvuloplasty introduced the era of cardiac surgery, Oley monitored patients in the operating room for the pioneering surgeon Egbert Fell.  He was similarly involved in the OR when heart-lung surgery was pioneered at Presbyterian Hospital.

Paul moved to Passavant Hospital and Northwestern Medical School in the early sixties. There he combined the positions of Chief of Medicine, Professor of Medicine, and Vice President for Health Sciences. His influence was felt throughout the institution and he received numerous awards and recognitions for clinical and teaching excellence. His colleagues in these years described him as fair-minded, thoughtful, complex and formal. He was especially considerate of younger physicians.

Oley Paul was a regular contributor to research in cardiology.  In the 1950’s he headed a group of 25 physicians in the Western Electric Study that became a milestone in relating cardiac histories and hypertension to the stresses of the work environment. In 1964, he presented an epochal study on the Natural History of Hypertension to an international Symposium on the epidemiology of hypertension. And in the 1970’s he led the Medical Risk Factors Intervention Trial, one of the first large scale epidemiologic studies to test the role of modifying risk factors in reducing the complications of hypertension and atherosclerosis.

Among the honors he received was the Presidency of the American Heart Association and the Chairmanship of the Subspecialty Board of Cardiology, the first of the subspecialty boards organized by the American Board of Internal Medicine.

In 1977 the new Dean of Harvard Medical School, Daniel C. Tosteson, invited Paul to become Director of Admissions. Paul accepted this role and its immediate responsibility, Chair of the Committee on Admissions. In view of the large number of Harvard graduates who become house staff and later go on to faculty positions, this committee is in some ways the most important one in the school.  He brought to the role his usual high standards.

Oglesby Paul sometimes attracted, and did not shrink from controversy. At Northwestern Medical School Oley proposed a revised organization for the private service at the major teaching hospital. The staff discussion was intense and polarized and the change never took place. At Harvard Medical School, as Director of Admissions, he proposed that the full admissions committee could provide the excellence of decision making needed to keep the extraordinarily successful affirmative action program going. This giant effort of Harvard Medical School began after the death of Martin Luther King and used a subcommittee to bring intense specialized judgment to the evaluation of minority students from non-traditional backgrounds. This proposal was also not adopted, but more than two decades later a version of Dr. Paul’s proposal was adopted as being more consistent with the evolving standards of the United States Supreme Court.

During this next phase of his career, post ordinary retirement, Paul was one of the emeritus professors of medicine whose presence graced Brigham Medical Rounds and enriched its teaching programs. He served as a clinical teacher for medical students and for cardiology fellows. All of them marveled at his reliance on history, physical examination, and simple tests to make difficult diagnoses and to establish relationships with patients whom he was ostensibly meeting only in teaching rounds. His long experience in cardiology and his personal learning in all of its many technical areas came into easy conjunction for these extraordinary teaching sessions.

Oley Paul’s contributions to HMS took many forms. He was a dedicated Class Agent who led by example and considered the Alumni Fund and its contributions to student welfare an outstanding philanthropy. He cooperated with Amalie Kass in a major campaign for renovating the Countway Library and preserving its medical manuscripts. He wrote a definitive biography of Paul Dudley White and a major tribute to Francis Peabody.

Oglesby Paul was married twice, his first wife Marguerite predeceased him in 1979 and left him two children, Rodman and Marnie. His second wife, Jean Paul brought three stepchildren to the union and there have since been three grandchildren and three step grandchildren. The second Mrs. Paul, herself a Mrs. Paul before their marriage, had kept an apartment in New York City when the two were married. After one year of the rigors of the admissions committee, she told Oley that unless he modified the committee’s approaches she was going to return to New York. Eager to preserve their union, Oley modified the procedures with no loss in excellence as a result. HMS, Dr. and Mrs. Paul, and the extended family all benefited from one more bit of Paul’s administrative genius. Dr. Paul will be remembered for this same genius in each of the institutions he served so well as teacher, administrator, researcher and outstanding physician.