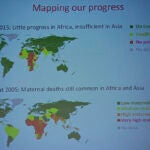 Race is a complicated subject in American political life. It is no less so in college admissions.

For decades, the U.S. Supreme Court has struggled with the issue of race in higher education. Its historic 1978 decision concerning affirmative action programs in college admissions generated six opinions. The deciding vote, cast by Associate Justice Lewis F. Powell Jr., held that the University of California could use affirmative action in admissions to achieve a diverse student body — but that using strict racial preferences to arrive at such diversity was unconstitutional.

According to recent research by a student at the Harvard Graduate School of Education (HGSE), admissions staffs and students at many colleges and universities continue to struggle with the topic. While both groups consider a diverse campus an important quality that enhances the learning environment, the results suggest that neither is sure how to determine such diversity.

A mother of four who worked for years as a lawyer specializing in business issues, Theresa Kaiser also has strong ties to education and admits to a “love and curiosity for learning.” Her father is a college professor, and for years she owned a school teaching English as a second language.

But it was her work as a volunteer in the guidance counselor’s office of her children’s high school, and her experience helping her daughters apply to college, that piqued her interest in higher education, in particular the college application process.

“Seeing how you identify race on a college application immediately seemed inaccurate to me,” said Kaiser, who has an adopted brother from a biracial family. “How can Americans express who they are by checking a few boxes?”

As part of her yearlong master’s program in higher education at HGSE, Kaiser decided to explore the subject and try to answer the question: “How do people identify anymore?”

The results were revealing, indicating that heritage, behavior, genetics, and physical appearance are all parts of a complicated racial picture.

For her project, Kaiser developed an online survey that asked students from three public universities how they would racially classify themselves. She also created a second survey to gauge what criteria college admissions offices consider in their efforts to achieve diversity.

Of the three schools that responded to Kaiser’s survey, two considered an applicant’s diversity based on cultural or social behavior the most valuable.

Additionally, 86 percent of respondents felt it was important to have a racially diverse student body, yet only 26 percent thought race should be considered in the admissions process.

“I was completely surprised that students identified themselves based on their biological makeup, but almost all of them most valued cultural ethnicity on campus,” said Kaiser.

While Kaiser acknowledges the need for further, more comprehensive research, she thinks her preliminary findings suggest that “perhaps students don’t believe that race as identified on college applications is identifying the type of diversity they find most rewarding.”

Similarly, she said her work indicates that diversity means different things to different universities, and that schools aren’t necessarily “getting the type of diversity they want from the application form.”

During her research, Kaiser also looked at DNA testing, a process that more people are turning to in an effort to determine their genetic heritage. In her paper, she cited the work of a teacher in Florida who had his students test their DNA as part of a class assignment. The majority of the students considered themselves white and of European descent, but the results showed that almost all of the students had mixed backgrounds, which included American Indian, African, and Asian genes.

If DNA testing becomes more widely used, it “could blow the whole racial piece away, as more and more could check at least one box on the application form, and likely more than one,” said Kaiser. “It could really render race identification useless over time.”

While much more work needs to be done on the topic, Kaiser is hopeful she can continue to study this area and help to shape an important dialogue.

“Maybe,” she said, “we can find a better way to define diversity.”