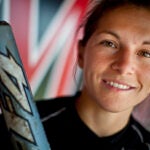 A key player on the field and off

In 1974, Yale divinity student Carol J. Adams was living in Cambridge and taking classes at Harvard. One October day, while walking down Oxford Street, she had an epiphany that would change her life. Meat is not just murder, she thought, but an expression of violence against women, an emblem of their oppression.

Adams had become a vegetarian a month before and was busy learning how to cook without meat. At the same time, she was reading a lot of feminist literature, and on Oxford Street fell into a reverie on chapter 7 of “Small Changes” by Marge Piercy. (An abused wife flees her husband, and swears off meat at the same time.)

For Adams, two worlds — feminism and vegetarianism — suddenly came together, like slot-machine cherries clicking into place.

That’s the image of intellectual discovery that Adams uses in one preface to “The Sexual Politics of Meat,” a breakthrough book on feminist-vegetarian theory. Its 20th anniversary edition will be on bookshelves next month, a fact that Adams celebrated in Cambridge Wednesday (April 28) with a lecture at Harvard.

Her talk, at the Science Center’s Hall D, was just steps from the locus of her epiphany almost 36 years earlier, an experience, she said later, “that levitated me 10 feet off the ground.”

Before that epiphany came an ordinary upbringing in rural New York: horses and ponies, a tomboy phase, and — yes — a picture of Adams as a cheerleader. And there was a girlhood of eating meat.

That started to change in 1973, when Adams went home after her first year in graduate school — and someone shot her horse Jimmy. “That evening I bit into a hamburger,” she said of those first hours of grief over her dead horse. “Suddenly I stopped [and thought]: I am eating a dead cow.”

Adams now sees that moment in feminist terms, believing that feminists see the same things as everyone else, but differently. “I knew I had to stop eating animals,” she said. Years later, her studies of feminist vegetarians (some of the work done at Radcliffe College) finally matured into the book she had started in 1975 as “The Oedible Complex,” a class paper for Boston College feminist philosopher Mary Daly.

When “Sexual Politics” appeared, it was red meat to right-wing commentators, who saw it as the latest example of political correctness. “They loved hating it,” said Adams.

Her lecture, which she has delivered at more than 50 colleges, was a nine-point outline of feminist-vegan thought. It was illustrated by dozens of disturbing, madcap, or downright bizarre images that Adams has culled from sympathetic readers — all of them meant to illustrate the connection that Western culture makes between sexual exploitation and meat eating.

There were restaurant posters, television commercials, newspaper illustrations, book jackets, magazine spreads, and food ads of every stripe — as long as the feminized pigs, cows, shrimp, and crayfish were seductively edible.

There was a naked chicken, legs up and ready for the oven, wearing high heels; fashion models posed in a meat locker, dressed in steaks; a “hamtastic” cartoon pig in a skirt, flashing her bulging shanks; “Littermate of the Year” in PlayBoar magazine, a spoof on you-know-what. (“This little piggy,” one headline read, “likes to get dirty.”)

Then there were the T-shirts and bumper stickers meant to underscore a cultural given — that eating meat is for real men. One read, “Eat beef: The West wasn’t won on salad.” The real West was won by killing Indians and usurping treaties, said Adams, who lives in Dallas. “Where there is anxious virility,” she added, “there is meat eating.”

Then there is another point, said Adams: “One does not eat meat without the death of an animal.” Behind the jokes, and — to the palette — behind the seasonings, there is a dead cow, pig, chicken, or other animal: what she called “the absent referent” in the consumption of meat.

To not admit that, or to not see that, allows for “the moral abandonment” of a being, said Adams. “Meat eaters are happiest when they don’t have to deal with these facts.”

In Western culture, both edible animals and attractive women are fragmented into part, Adams suggested. She showed one ad of a man at a table, seasoning a shapely female leg. An Arby’s ad shows a close-up of a woman crossing her arms in front of two bra-like hamburger buns. “We’re about to show you something,” the copy reads, “you’ll really drool over.”

Feminism sees the environmental harm in eating meat too, said Adams, who called on “ecofeminist theory” to point out the contribution of meat production to depleted soils, water waste, high fuel consumption, and habitat fragmentation.

Worldwide, she said, 33 percent of arable land is devoted to raising meat and the grain it requires; a third of fossil fuel consumption is expended on meat production; and 70 percent of U.S. grain is used to feed animals.

Don’t forget the cost of eggs and dairy — “feminized protein” that requires a constant state of lactation (milk) or reproductive efficiency (eggs), said Adams, who is a vegan, a vegetarian who does not eat animal products. “Milk comes from a grieving mother,” she said.

Some animal advertising is about what Adams called “suicide” food, that is, animals who sing about (or hint at) their own demise. Think of Charlie the Tuna shilling on TV for canned tuna fish. (“Sorry, Charlie” became an American catchphrase.) Or watch a chorus of hens on “Sesame Street” poke fun at themselves. “Even when I’m down,” goes one line, “I’m still Grade A.”

Still, for all the power of the ads, “this slide show is not about advertising,” said Adams. It is about the “consciousness-creating” culture the ads come from, she said.

In her 90-minute talk, Adams came to the real point early, by giving her sense of being a feminist vegan. “In my life, I want to do the least harm possible,” she said. “I want to walk lightly on this Earth.” Late in the talk, after dozens of slides that equated eating meat to sexual exploitation, she came around to a counterpoint. “In our culture,” observed a sobered Adams, “we have a hostility to caring.”

Some of the 85 people at the lecture showed a little hostility of their own. One complained to Adams that her argument would be strengthened by statistics. “I hate statistics,” she replied, bristling at the male urge to quantify. “I don’t care how many times [a woman-hating ad] is presented. I care that it’s presented.”

Another complained that Adams had treated the statistics questioner unfairly. One more argued that “getting it” — that is, understanding a vegetarian’s view — doesn’t mean necessarily agreeing with it.

Another questioner asked: Would you oppose eating meat if animals were killed humanely?

Said Adams, “There is no ideal way to kill an animal.”

To learn more about Vegitas.