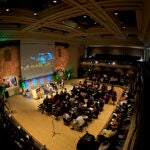 A love of math, English country dance, and the Beatles

Sophie Morel turned 30 on December 16 of last year, the day after she was appointed a professor of mathematics in Harvard’s Faculty of Arts and Sciences and a Radcliffe Alumnae Professor at the Radcliffe Institute for Advanced Study.

How to explain this impressive achievement by such a young person? Benedict H. Gross ’71, the George Vasmer Leverett Professor of Mathematics at Harvard, former dean of Harvard College, and former dean of undergraduate education, has a simple answer: “She’s determined.”

Obviously, Morel has an extraordinary mind, but in Gross’s view that’s a trait shared by many people. “She was determined to make her mark in mathematics,” he says. And Gross believes that young people are key to the field. “They’re the ones who bring the really great ideas into the world,” he says. “We’ve made six appointments in the past five or six years, almost all of them people who were in their 20s when we appointed them. They invigorate our department.”

The area of mathematics in which Morel has already made contributions is called the Langlands program, initiated by Robert Langlands, a professor at the Institute for Advanced Study in Princeton, New Jersey, from 1972 to 2007, and now professor emeritus. Langlands brought together two fields, number theory and representation theory. “It’s a connection that no one doubts,” Gross says. “And yet the bridge between them hasn’t been completely built.” Morel has made significant advances in building that bridge. “It’s an extremely exciting area of mathematics,” Gross says, “and it requires a vast background of knowledge, because you have to know both subjects plus algebraic geometry.”

The Radcliffe Alumnae Professorship—which will allow Morel to spend four semesters at the Radcliffe Institute during her first five years at Harvard—was a critical factor, Gross says, in recruiting her. “Candidates of her caliber get offers from everywhere,” he says. “The fact that we can say to a young person like Sophie, ‘We’re so excited about your research that Radcliffe is going to give you some time to focus on it’ is a huge advantage. Helping us attract young faculty members is one of the great things that the Radcliffe Institute does.”

Jeremy Bloxham, dean of science in the Faculty of Arts and Sciences, says “Sophie Morel is among the world’s most promising young mathematicians working in number theory, algebraic geometry, and representation theory. Her doctoral thesis was extremely demanding and stunningly original, solving a problem that had been intractable for more than 20 years.”

Barbara J. Grosz, dean of the Radcliffe Institute and the Higgins Professor of Natural Sciences at Harvard’s School of Engineering and Applied Sciences, emphasizes how grateful she is to the Radcliffe alumnae and friends who contributed to the professorship. “They enabled the recruitment of a distinguished scholar who embodies Radcliffe’s long-standing tradition of excellence and achievement,” she says.

A tradition of excellence and achievement in the Langlands program is already evident at the Radcliffe Institute. Current fellow Rachel Ollivier RI ’10 works in this area (and has taught at Morel’s alma mater École Normale Supérieure in Paris), as did Marie-France Vigneras RI ’07 and Pierrette Cassou-Noguès RI ’06.

Morel says she’s honored to be appointed the Radcliffe Alumnae Professor. Soft-spoken and understated in an interview, she doesn’t make much of the fact that she’s the first tenured woman in the Harvard math department. “I didn’t realize it when they first offered me [the position], but I’ve been told many times,” she says with a smile.

Asked how she became interested in math, Morel says her mother worked in a school library and brought home high school math textbooks and a math magazine aimed at high school students. When Morel was 14, she read about Andrew Wiles, now chair of the math department at Princeton, who proved Fermat’s Last Theorem. She followed the story avidly, learning that Wiles and his former student Richard Taylor, now a member of the Harvard math department, had discovered a fundamental error in the original proof, which they corrected in a 1995 paper.

Morel studied math at the École Normale Supérieure in Paris, an elite school that counts 12 Nobel laureates and 9 recipients of the Fields medal among its alumni, before earning her PhD at Université Paris-Sud 11, one of France’s most renowned universities, particularly in the sciences. In 2006, she was awarded a postdoctoral position at the Institute for Advanced Study, where she remained until 2009. She also won a research fellowship from the Clay Mathematics Institute, here in Cambridge,  an affiliation she will maintain until 2011.

What is it about mathematics that Morel loves? “It’s hard for me to understand why everybody doesn’t love it,” she says. “It seems so natural.”

She may spend most of her time focused on math, but Morel has other interests as well. In addition to English country dance and the Beatles, she loves learning new languages. She speaks French, English, German, Russian, and Spanish, and now she’s learning Korean.