Living the lessons we have learned 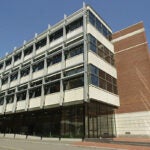 How to engineer change

A Native American student ponders the lives of her Harvard

Engraved on a large slate plaque affixed to Matthews Hall in Harvard Yard is the story of Native Americans’ past and the narrative of our future. That is the site of the original Indian College, Harvard’s first brick building, where more than 350 years ago Caleb Cheeshahteaumuck and Joel Iacoomes of the Wampanoag Tribe of Aquinnah on Martha’s Vineyard lived and studied alongside English students. Caleb was the first Native American to graduate from Harvard, in 1665.

The Indian College also housed the College’s printing press, on which the first Bible in North America was printed. The Bible was a translation into the Algonquian Indian language.

Behind the plaque’s inscription is a faint, incised representation of a turtle, a powerful symbol in Native American creation stories. The turtle represents many things. One is a creative source, the most powerful force we possess. The turtle also embodies a sense of being well-grounded, self-contained, with a steady approach to life. These qualities resonate with many of the lessons learned at Harvard.

I soon will be an unlikely graduate of the University. My grandfather, a member of the Standing Rock Sioux Tribe in North Dakota, experienced a precarious childhood. Grinding poverty, disease, and despair had taken root across the reservation in the early 1900s. Often there was not enough food or fuel. His brother, along with thousands of other Indian children, was taken from his family and sent far away to an Indian boarding school in Carlisle, Penn. Boarding schools were part of the federal government’s assimilationist policies aimed at severing Indians’ ties to the land.

Like so many Indian children, my grandfather grew up with his feet in two worlds. One foot was in the Indian world, rich with traditions and ceremonies, a language that nurtured his spirit and heart, and a homeland that gave him a sense of place. His other foot was in the fast-paced white world of trains and cars and different habits. Like so many Indian children of that time, he grew up confused about his identity and indefinite place in American society.

I delved into this history as a law student. It was very disturbing to learn that two generations later things had not greatly improved in Indian country. The wholesale removal of Indian children from their homes and the displacement of their families continued well into the 1970s. This has been the most tragic aspect of Indian life today. Children everywhere deserve to grow up in a safe, stable, and nurturing environment.

I decided then to work for the rights of Native American tribes to be self-determined and self-sufficient, and to help improve conditions on Indian reservations. This work, like development work throughout the world, requires a turtle approach: One must be creative, well-grounded, and have steadfast determination, even in the face of daunting obstacles or discouragement. (After graduation, I plan to return to Vermillion, S.D., where I teach federal Indian law and direct the Institute of American Indian Studies at the University of South Dakota.)

Constancy served Caleb well at Harvard. Despite the hardships of being away from his family and the contradictions of living in the white man’s world, he earned honors in his studies. Sadly, his life, like Joel’s, was cut short by the perils of the time. After Caleb graduated, there was no identifiable Native American presence at Harvard for more than 250 years. Now, about 120 Native American students from 40 tribes study at Harvard every year.

Many Native American students at Harvard still struggle with the contradictions that Caleb and Joel faced. We still have our feet in two worlds. One day we are in our jeans studying economic theory, and the next we are in our jingle dresses dancing at the powwow. Soon we will be in the Yard receiving our degrees, and shortly after we will be fishing or hunting to feed the community. What matters is that we have persisted — that our language, traditions, and culture have endured. While our time at Harvard has given us a sense of place here, what we have learned will extend far beyond these ivy-covered walls. It will reach across all of our borders and become a part of our communities.

Culture mattered then and matters today. The diversity of our cultures is the underpinning of our human bonds, and of our intolerance and prejudice as well. Caleb and Joel lived and studied alongside their ethnic English classmates at a time when the two cultures disputed one another’s right to exist on the continent. Three centuries later, we persist, mostly intact, and determined as ever.

Diversity abounds at Harvard today. Diversity in race and ethnicities, of different religious beliefs and spiritual practices, and in widely varied talents and interests. This diversity, spurred many years ago by Caleb and Joel, not only invigorates the vitality of our learning experience, it cultivates a broader and more insightful view of the world.

The lessons gleaned from the plaque affixed to Matthews Hall continue to inspire us to know the human value of the world and to place ourselves within it. There is certainty in the lessons we have learned from the past, of being creative, well-grounded, and steadfast. Let us not linger, for there is no time to spare. So let us begin.