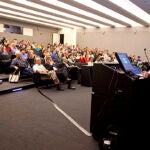 An addiction to fossil fuels

Clean, renewable wind and solar power may be the most-preferred fossil fuel alternatives, but their land-hungry collecting requirements make them difficult options for replacing more conventional power sources, according to a British energy expert.

David MacKay, chief scientific adviser to the United Kingdom’s Department of Energy and Climate Change and a professor of natural philosophy in the Department of Physics at Cambridge University, crunched the numbers on how much energy some sources can generate per unit area to illustrate that renewable types probably will be part of a future energy mix, rather than the solutions.

MacKay, author of the recent book, “Sustainable Energy — Without the Hot Air,” said that to generate enough power to replace fossil fuels, some renewable sources would have to cover enormous swaths of territory. Wind farms, for example, would have to cover half of Britain to meet that nation’s energy needs, he said. MacKay said he has been accused of being anti-wind for pointing this out. He’s actually pro-wind, he said, but quipped that he’s even more “pro-arithmetic.”

“The message about renewables is that, to make a difference, renewable facilities have to be country-sized,” MacKay said, noting that some people are already fighting construction of wind farms in areas they deem inappropriate.

MacKay spoke Friday (April 2) at the Northwest Laboratories as part of the Future of Energy lecture series sponsored by the Harvard University Center for the Environment (HUCE). MacKay was introduced by HUCE director Daniel Schrag, Sturgis Hooper Professor of Geology and professor of environmental science and engineering.

Though MacKay said moving to an all-renewable power system would be difficult, he also said the status quo cannot continue. Fossil fuels are not only warming the globe, they are a finite resource. In addition, he said, the need to import fossil fuels creates security and supply concerns. As much as 90 percent of future energy should come from non-fossil fuel sources, he said.

“We have an addiction to fossil fuels, and it’s not sustainable,” MacKay said.

MacKay broke down current energy demands into simple units and then took a cut-and-paste approach with alternatives, saying he’s not particularly fussy about the exact combination that replaces fossil fuels, as long as it gets done.

The generating capacity per unit area of nuclear power plants is 400 times that of wind farms, making them a potentially useful part of a future mix. Besides wind and solar power, also in the mix could be clean coal plants and hydropower from unconventional sources, such as tides and ocean currents. MacKay also advocated decreasing demand by insulating buildings better, by switching to more efficient building systems such as heat pumps, by turning down thermostats, and by turning off appliances when not in use. Transportation, he said, should be predominantly electric-powered, and solar power generation would be more efficient if plants were built in regions that get lots of sun, such as the Sahara Desert and the American Southwest.

“Getting off fossil fuels will not be easy, but it is possible,” MacKay said.