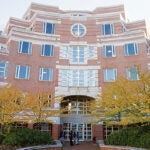 János Kornai, the Allie S. Freed Professor of Economics Emeritus at Harvard, on March 15 was presented with Hungary’s highest state decoration, the Grand Cross Order of Merit of the Republic of Hungary. The Hungarian president, László Sólyom, presented Kornai with the award as part of the celebration of Hungary’s national holiday, National Day. By tradition, the Hungarian president awards state decorations at the Hungarian Parliament on the holiday.

Kornai, who was appointed professor of economics at Harvard in 1986, is also a Permanent Fellow Emeritus of Collegium Budapest, and divided his time between Cambridge, Mass., and Budapest, Hungary, until his retirement in 2002.

The official announcement emphasizes “his life achievement and internationally acknowledged results in researching the theory and performance of economic systems.”