Helping outside the classroom 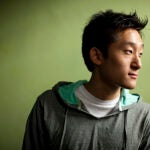 Reflecting on a young life

Spring is in the air. Along with that seasonal shift, the Harvard Achievement Support Initiative (HASI) is launching a fresh series of SmartTALK Family Events in the Boston Public Schools. The events help kindergarteners to fifth-graders, their families, school staff, and partners learn more about games and strategies that support academic success during out-of-school time.

The motto on the nearby copies of the trivia-style children’s game “Brain Quest” reflected the program’s goal. “It’s OK to be smart!” captured the essence of the community outreach effort, which recently drew nearly 20 staff members from Harvard Public Affairs and Communications to a warehouse near HASI’s Allston headquarters to turn the stacks of math and language arts games into 1,800 SmartTALK learning kits.

The kits, containing grade-appropriate games and bilingual English-Spanish “how-to” guides, are an essential element of the Family Events. With the next round of 18 sessions kicking off early this month, the staffers were working that day against the clock. The games included “Rattatat Kat,” along with “Blink” and “Fraction Power,” two math-based card games. Some staffers opened the boxes, and others worked on assembling the kits.

The SmartTALK Family Events are part of Harvard’s effort to support out-of-school learning in nine Boston-area Step UP schools. Step UP is a collaboration among local universities and Boston schools that promotes student achievement. Harvard is a founding member of Step UP and has been offering after-school program support, learning materials, and professional development at the schools for the past three years.

“The missing link of our work was connecting back to families,” said Paige Lewin, HASI associate director. According to Lewin, the new SmartTALK Family Events programming also aligns with the work of Karen Mapp, the Harvard Graduate School of Education lecturer who advocates engaging parents in their children’s academic work to support achievement.

“Asking families to come to a bake sale is not as effective as getting families involved in the learning of their children,” said Lewin. “At the Family Events, we’ll give families tools they can use to support ‘quality’ or ‘smart’ talk at home.”

By the end of the afternoon, volunteers had converted the pile of boxes that had lined the warehouse into 729 Family Events kits, and had organized the remaining materials for quick assembly.