Getting a bird’s-eye view of the past 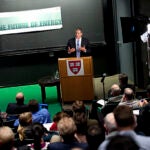 Sometimes, you have to step back to see the big picture.

That’s the lesson that archaeology students are sharing with the public through a new exhibit at the Peabody Museum of Archaeology and Ethnology.

The exhibit, “Spying on the Past: Declassified Satellite Images and Archaeology,” which remains open throughout the summer, presents case studies of how satellite images can illuminate archaeologically important landscape features that might not be visible from the ground. The examples are from sites in Syria, Iraq, Iran, and Peru. They reveal evidence of cities, trackways, irrigation canals, and even traces of nomadic travels.

Ruth Pimentel, a student in the Anthropology Department’s sophomore tutorial in archaeology, said she’s thrilled to be able to share the excitement she felt in learning how to use satellite photos as archaeological tools.

“While I was doing the research this semester, I kept seizing my hapless roommates, showing them pictures on my computer and talking them through the method, just because I couldn’t keep to myself how cool it was,” Pimentel said. “Having gallery space in the Peabody means everyone in the class will get to explain how awesome and exciting this material is, and with much bigger pictures.”

The students’ work stems from more than a decade’s effort by Jason Ur, associate professor of anthropology, who has long used satellite photos to track elusive details of ancient civilizations and interpret them to gain new understanding of old ways of life (detailed in features such as irrigation canals) and connections between communities (elucidated by long-lost roadways).

“The way humans modify their landscapes often has a pattern or regularity, whether intentional or unintentional, that cannot be appreciated from the ground,” Ur said. “I find the emergent order of networks of tracks or patterns of irrigation fields to be almost hypnotic from above.”

Guided by Ur, students in the sophomore tutorial in archaeology first learned the techniques of analyzing satellite photos and then applied them to several archaeologically rich areas. Pimentel worked on the Assyrian Irrigation Project, which focused on northern Iraq near the Turkish border. She examined photographs of the remains of canals built under Assyrian emperors before the empire crumbled in the seventh century B.C.

“We propose that the canals were partly displays of power — the extra water allowing for elaborate royal gardens, for example — and partly large-scale efforts to support agriculture for the increasingly concentrated population,” Pimentel said. “The canals are now mostly obscured by modern farms and towns. But on the satellite images, we’re able to see faint lines on a huge scale across the landscape, evidence of the massive earthworks once there.”

Pimentel said some of the features were so faint that she had to train her eyes to detect them in the photos. There were some photos, however, in which the canals were immediately evident, she said.

“We get excited about those images. They’re our showstoppers,” Pimentel said.

In conducting his own research, satellite photos are just a starting point for Ur. He scours the images for patterns and follows that examination by traveling to a site to inspect the features of interest from the ground. He then goes back to the photos, reinspecting them with a new understanding of the landscape. There are times when, looking at the photos, features are difficult to discern, but there are other times when it’s clear something’s there, making interpretation the challenge.

Ur draws photos from various sources. He even hails Google Earth as an excellent tool for an armchair archaeologist because it can fly you to the Great Pyramids and Stonehenge without leaving the office. Most valuable, though, are older photos, such as those from the CORONA spy satellites, declassified in the 1990s and available from the U.S. Geological Survey. Because CORONA flew in the 1960s and 1970s, the photos are less expensive than images from modern satellites, but Ur said even more important is that they allow him to look back in time. Forty years ago, there was much less development in some key areas, making features visible that might be obscured now.

“I hope visitors come away learning something new about the ancient cultures of Peru, of course, but also that archaeological sites are fragile places in a changing landscape,” said Adam Stack, a graduate student in archaeology who took the course and studied the Chan Chan site on Peru’s north coast. “It will take more than archaeologists to protect the past.”