Gates on giving, getting, sharing 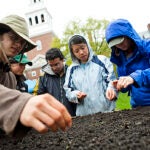 Lessons from the Earth

William Henry “Bill” Gates III dropped out of Harvard College in 1975 in the fall of his junior year. Barely 20, he went on to build the computer giant Microsoft, an entrepreneurial feat that earned him billions and helped to usher in the Internet age.

Gates came back to Harvard today (April 21), this time for less than an hour at Sanders Theatre, where hundreds of students were packed in like lines of software code. It was the last stop on a three-day, five-campus tour.

“When I dropped out,” Gates said to a few whoops and cheers, “I told my dad I’d be back.”

It was his first visit to Harvard as a full-time philanthropist, and Gates came armed with a burning question: “Are the brightest minds working on the most important problems?”

Defining who the best people are is not easy, though many of them are at Harvard and other great universities, Gates said. And defining the biggest problems is not easy either, he said, though they certainly include abject poverty, unequal opportunity, overpopulation, farm efficiency, and finding sources of low-cost, nonpolluting energy.

Anyone can name “eight or 10 problems,” said Gates, but are “the top innovators” addressing them?

A few breakthroughs and some modest efforts on the part of the world’s gifted can add up to great gains, he said. But maybe our minds are elsewhere.

Gates told the story of a recent two-day visit with friends. The conversation kept coming back to two things: college basketball and investments — what was new in stocks, derivatives, mergers, and other financial instruments.

Gates had to wonder: “Couldn’t we be having that same conversation about what makes a great teacher?”

The Seattle-born billionaire loves a good book, movie, basketball game — or investment — as much as anyone, he said. But there is a social cost.

“A lot of our best minds are going to sports or entertainment or finance,” said Gates, and the genius of science is often turned toward remedies for baldness in a world desperate for cheap vaccines.

There are exceptions and signs of hope, he said, mentioning the work at Harvard of George Whitesides (nanoscale science) and Paul Farmer (medical care), “an exemplar,” said Gates, “who’s drawn a lot of people into global health.”

And 324 members of the Class of 2010 at Harvard — 18 percent of seniors — have applied for jobs with Teach for America.

In his own college days, said Gates, few people were aware of, for instance, food and health problems on a global scale. Nor were they aware that their careers could be steered toward doing good.

“I fell into computers at the age of 13,” he said of his career path, and loved the idea that computers “scared other people. That attracted me.”

As it turned out, that kind of work has social merit, said Gates, offering the world new ways to get information through personal computers and the Web.

But there is still an imbalance between what people do and what the world needs, he said. Gates suggested to a questioner later, “The allocation of IQ to Wall Street is higher than it should be.”

With a businessman’s incisive brevity (his talk lasted 24 minutes), Gates focused on two major problems: global health and American education. He discussed how much can be achieved in those areas by bringing the brightest minds to bear on them.

Global health has improved in the last five decades, and some progress can be attributed to rising wealth, said Gates. In 1960, about 20 million children under age 5 died from preventable diseases. Last year, fewer than 9 million did.

The biggest reason for declining death rates came from one of medicine’s strongest weapons, vaccines, though they remain “a tiny part of the investment we make in medicine,” said Gates. (The Bill & Melinda Gates Foundation has pledged more than $10 billion to develop and deliver new vaccines in the next decade.)

About half a million people die each year from flulike rotaviruses. There are vaccines but “no large market,” said Gates. “It wasn’t getting out, it wasn’t getting done.”

Once a country’s health picture improves, parents tend to have fewer children. Add in improvements such as female literacy, farm productivity, and other “catalytic” steps, and escaping “the poverty trap” is possible, said Gates. He cited the efficacy of early, inexpensive aid interventions in South Korea, Mexico, and Brazil.

As for American education, Gates said it has slipped from the gains of 1945-1975, and now 30 percent of entering high school freshmen do not graduate — a figure that is 50 percent for minorities.

“We really need to improve this,” said Gates. “The other rich countries are doing a lot better,” and they spend less.

But there is room for hope, he said, pointing to research being done at Harvard and elsewhere on what makes the strongest teachers, and how to pass along their best practices.

In education, online learning will help improve the situation, with links to videos on key concepts, along with ways to develop online advising, forums, and testing. “That’s a very doable thing,” said Gates. “Technology is going to have a role there.”

And innovative education does not have to cost a lot, he said, referring to his sometimes controversial support of charter and nontraditional solutions.

“Every time I get discouraged,” he told one questioner later, “I go to a KIPP school and say: This can be done.” KIPP stands for the Knowledge is Power Program, a network of college-preparatory U.S. public schools that Gates said now number 82 — and that send 95 percent of their graduates to four-year colleges.

A lot of other problems cry out for innovation and modest investments, he said, including energy and good governance. But underlying such matters is a single “meta-question,” Gates emphasized. “How do we get the brightest people onto the biggest problems?”

The audience members at Sanders had a few questions of their own.

Which is better, asked one man: Take a high-paying job and give to a good cause, or take a job in the nonprofit sector?

“Both models work,” said Gates, who outlined one scenario: Work, but study one problem or country, and devote extra resources to that. “Then when you get lots of time,” he said, “you can get even more involved.”

Some of the queries were — don’t we all want to ask? — self-serving. One questioner asked Gates to meet him on vacation in 2012. Too busy, said the billionaire. Another touted a friend’s nontraditional malaria cure. “It’s definitely a long shot,” said Gates, though long shots sometimes work out.

Another man, a would-be applicant to the Harvard Kennedy School, got even more personal. “So my question is: Can you pay for me?” he asked Gates. “I’m one of the best students in Kazakhstan.”

The billionaire dropout was ready. “I applaud your boldness,” he said.