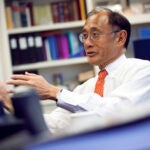 Seeing Harvard from all sides

Acting locally, Harvard has ramped up energy savings while driving down usage

While the Earth warms, Harvard has warmed to the idea making a difference in climate change.

For years, and in increasing measure, the University’s research in science, policy, business, design, and even divinity involves thinking globally. Meanwhile, Harvard’s students, faculty, and staff are acting locally.

All of this is designed to reduce the University’s output of Earth-warming greenhouse gases (GHG).

In 2008, Harvard’s ethic of energy reduction was memorialized in an ambitious goal articulated by President Drew Faust, to reduce GHG emissions at Harvard 30 percent by 2016, with 2006 as a baseline year. The goal is inclusive of growth in the University’s physical size.

Late last year, each of Harvard’s 12 Schools and divisions, with oversight from an executive committee and the Office for Sustainability, submitted a detailed emissions reduction plan. A University master plan is in the works and will appear later this year.

The results so far are making a difference. From Fiscal Year 2006 to FY 2009, Harvard has reduced its GHG emissions by 7 percent (14 percent if growth is left out of the equation). In some cases, individual progress is remarkable. Harvard Business School, for instance, has already cut its emissions by 29 percent. Reductions at Harvard Kennedy School come in at 16 percent.

On the eve of the 40th Earth Day, here is a timeline of how Harvard has acted locally in the last decade:

Earth Day was the inspiration of Sen. Gaylord Nelson (D-Wisc.). He chose Denis Hayes, a 25-year-old Wisconsinite who grew up in rural Washington, to organize the event. At the time, Hayes — a onetime Vietnam War protester at Stanford University — was a student at the Harvard Kennedy School.

On the first Earth Day — April 22, 1970 — HBS held an “environmental teach-in,” an event featured two days later on the front page of the Harvard University Gazette. “Scores of groups” across campus discussed pollution and other topics, the 10-line story said. Joining them in similar teach-ins across the country that day were an estimated 20 million people, including participants on 2,000 college campuses.