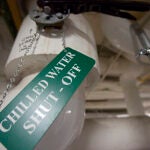 The greening of the Law School

In Q&A session, veteran officials discuss what it’s like to oversee everyday security

Veteran police officials James Claiborne and Michael Giacoppo signed on last fall as deputy chiefs in the Harvard University Police Department. Together, they have 65 years of experience in patrol and supervision.

Claiborne, 57, is a veteran of the Boston Police Department. He is now in charge of policing at Harvard’s Cambridge campus. Giacoppo, 59, served with the Cambridge Police Department. He now oversees the University’s police operations in Boston. It’s a reversal of their geographical orientations. “We’re both learning each other’s back yard,” said Giacoppo.

What does their presence mean for the University’s force of 87 officers and the kind of policing they do? Here is an abbreviated version of a recent question-and-answer session with the veteran officers.

Q. You both served with big-city departments. Is doing police work at Harvard culture shock?

Giacoppo: It’s a lot quieter than where we’re from. I was used to dealing with crisis every day. Coming to Harvard [there] is a different set of issues. You’re not in the maelstrom as often, if at all.

Claiborne: While it’s quieter, the day-to-day tasks have a different complexity. In the city, you’re pretty autonomous. Here you’re in a web of complex relationships between the various parts of the University.

Q. Community policing has long been part of the Harvard landscape. Any changes ahead?

Claiborne: We’ll broaden and strengthen the community policing program. What I foresee is that every building on this campus will basically be owned by one of the officers. There will be a relationship between those facilities, those residential Houses, and a particular Harvard officer. We’re trying to push a sense of ownership and accountability.

Giacoppo: Community policing is a strategy, it’s a way of doing business, it’s your mindset. The key here is partnerships and outreach and knowing your community and them knowing you. Every day is an opportunity to build those partnerships.

Claiborne: To paraphrase one of our politicians, all politics is local. All policing is local also. Regardless of how large you are, the real work of the police department is starting with where the [officers] meet the citizens.

Q. Any observations about the HUPD force?

Claiborne: One of the things that impressed me most is the quality of the personnel. Without the constraints of civil service, we are able to hire people who are as close to ideal as possible, who fit the needs of the Harvard campus and the Harvard Police Department. Some of the officers in other places we’ve worked wouldn’t fit here. The officers we hire fit.

Giacoppo: I was surprised at the amount of medical assistance that the patrol force offers. They handle medical service calls all the time.

Claiborne: I was impressed by the amount of care the officers render. We are really a full-service social service agency. [The department’s] philosophy is that if you live here, work here, or study here you’re a client of the Harvard University Police Department.

Giacoppo: The officers here, without question, are expert report writers. That’s one of the issues you see with PDs [police departments]. The quality of the reports goes from very, very good to very, very bad. Here, I’ve been very impressed with the way they structure their reports and their oversight.

Claiborne: Community policing has been in vogue for a while. A lot of departments talk about problem-solving training. These officers put it into practice, probably better than any group of officers I’ve been associated with.

Giacoppo: I haven’t had one single moment or day that I’ve regretted coming here, or that I’ve been frustrated or bored or anything. The lure of Harvard is special for me.

Claiborne: This is a service organization. We’re here to make life better for the people who live here or study here and work here. And we are accessible to them. We’re willing to help, to encourage people to communicate with the HUPD. There are no silly problems. There are no problems that are too small.