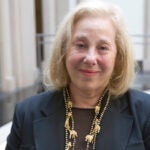 Two documentaries from this year’s Sundance Film Festival had an exclusive screening at the inaugural Gleitsman Social Change Film Forum at the Harvard Kennedy School (HKS).

Sponsored by HKS’s Center for Public Leadership, the film forum on April 16 and 17 enabled top filmmakers to meet with leading public policymakers as well as student social entrepreneurs and activists hungry for a more in-depth understanding of the possibilities of film as a vehicle for social change.

The films showcased at the festival were “Countdown to Zero,” which examines the risk of nuclear proliferation, nuclear terrorism, and accidental nuclear exchanges, and “A Small Act,” which describes a ripple effect of generosity created by an anonymous gift to help educate a boy in Kenya.

Graham Allison, director of the Belfer Center for Science and International Affairs, and David R. Gergen, director of the Center for Public Leadership, participated in the panel discussions, as did former CIA covert operations officer and nuclear arms trade expert Valerie Plame Wilson.

­If you have an item for Around the Schools, please e-mail your write-up (150-200 words) to georgia_bellas@harvard.edu.