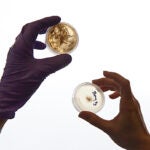 Program shows them Harvard labs that track how the brain works

Wide-eyed and bouncing in place, the 18-year-old, who had traveled from Vermont to the Harvard Brain Tissue Resource Center at McLean Hospital in Belmont, Mass., was eager to hold something special: a human brain.

After a brief introduction and comments from Tim Wheelock, the center’s assistant director in neuropathology, Takei donned a Tyvek gown and latex gloves and picked up one of several cerebral specimens on the steel table before him.

Without even a hint of irony, the awestruck teen called it “mind-blowing.”

“It’s hard to believe that this 1,400-gram hunk of stuff is what controls everything. At one point, this was some guy’s brain, and he had thoughts and dreams, but now he is being studied by me,” said Takei in amazement as he turned the brain over repeatedly in his hands.

Takei was part of a high school class trip coordinated with the help of Adi Flesher, a master’s student at the Harvard Graduate School of Education (HGSE).

Flesher is pursuing his degree in the School’s Mind, Brain, and Education program, an interdisciplinary, one-year sequence that connects the study of cognition, neuroscience, and educational practice.

“I just really got interested in talking with kids about their minds,” said Flesher, a former assistant director of a summer camp who became increasingly fascinated with how and what his young campers thought after hearing them discuss their own struggles with attention deficit and obsessive compulsive disorders.

“We take 16-year-olds and teach them about a car so that they can drive. There’s driver’s ed, but there’s no brain ed,” said Flesher. “If you think about it, the study of the brain is a much more basic and important part of human life that we don’t really address in any formal way in the education system.”

When his brother Amir, a teacher at the Compass School in Vermont, needed to help develop an interdisciplinary elective class, one that could rival the school’s established filmmaking course in popularity, he looked to Adi for inspiration.

In exploring what to study, Amir and fellow teacher Beth White brainstormed with their students on possible topics. In the end, the brain was the top vote getter. With help and suggestions from the students and input from Adi, the teachers combined the science and psychology of the brain into a class they call “The Science of the Mind.” The course is a series of workshops divided into a humanities component — where the teens study such diverse areas as Buddhist psychology, Plato’s “Parable of the Cave,” and the psychological dimensions to the science fiction film “The Matrix” — and a science section, where they study the anatomy and mechanics of the human brain. As a final project, students write an academic article on a mind or brain topic for inclusion in their own scientific journal.

The class culminated in last week’s outing to neuroscience, psychology, and education labs around the University. This is the second trip to Harvard for the high school class. The first group of Compass students visited in 2008 when the course was in its pilot phase. Though Amir and White coordinated the first excursion, they were able to use Adi’s Harvard connections to broaden the scope of this year’s visit.

The students listened intently on March 25 as Joshua Greene explained how the brain engages in moral reasoning. Greene, an assistant professor in the Department of Psychology who directs Harvard’s Moral Cognition Lab, discussed how he uses neuroimaging to explore how the brain reacts to the “trolley problem,” an ethical dilemma that asks if it is morally acceptable to throw a switch that will guide an errant trolley onto a track, killing one trapped person, but saving five others trapped along the track’s first section.

Ariel Temple, 17, said of Greene’s research, “I just love challenging my mind with those hypotheticals: What would I do, what’s moral, what’s not. All that kind of stuff, I just find it really fun.”

Later that day, the group visited HGSE’s Project Zero, where the students offered themselves up as test subjects for master’s candidates developing experiments around how people think about the concept of emergence, and video games aimed at helping students to learn about science.

For the youngest member of the expedition, handling human brains was challenging.

“The thought that holding somebody’s brain in your hands is [holding] everything that made them who they were, their thoughts, their memories, their life’s story … that is a lot to take in,” said Meghan McGowan.

Still, the 16-year-old was thrilled to meet Greene, the author of a paper on moral reasoning that she read prior to the trip.

“I read it like seven times, and thought ‘this is so cool.’ Come to find out yesterday, the guy who wrote it, we met.”

Flesher and his brother are now exploring ways to bring the brain class to more students, in part through summer camp programs, and by developing a teaching model that can be used by other schools.

“Our ultimate hope,” said Adi, “is to get more kids engaged in this kind of cool learning.”