A key player on the field and off 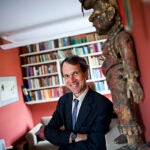 Teaching as ‘a secular pulpit’

Ask Melissa Schellberg ’10 why she is so passionate about community service, and she won’t give you a calculated plan or vision for change. She’ll keep it simple.

“I’ve always liked helping people, but I never really thought of myself as one of those people who will save the world,” laughed the Harvard softball co-captain. Even so, she has brought about change.

“It was suggested that teams do community service, but never required [for teams] unless the coach is really on them,” Schellberg said. “But coaches have a lot to do, and I wanted to help out, meet with coaches, and be the facilitator and coordinator of their projects.”

With the support of Fry and Harvard Athletics, she created and served in the role, developing relationships with nonprofit groups in the Boston area to create a more structured program of service opportunities for Harvard’s varsity teams.

Last year, one of Schellberg’s collaborative initiatives with SAAC was “Bench Press for Breast Cancer,” a fundraising event that invited all 41 varsity teams to participate. The event raised more than $6,000 for the Susan G. Komen Breast Cancer Foundation to support cancer research.

It wasn’t long before word spread about Schellberg’s service work. Athletes for a Better World took notice, and this past December she was named one of six collegiate finalists nationally for the prestigious Coach Wooden Citizenship Cup, which is given to the student athlete who has “made the greatest positive influence in the lives of others.”

With her success off the field and within the athletic community, it would be easy to gloss over the impact the Las Vegas native has had on Harvard softball as a whole.

Schellberg, who has started nearly every game of her college career, has been one of Harvard’s top offensive and defensive contributors on the diamond. As a freshman in 2006, she finished fourth on the team with a .311 batting average, and helped Harvard to its first Ivy League championship in five years. This season she is third on the team in hits, second in fielding percentage, leads in fielding assists, and is on pace to finish fourth all-time in assists.

“She’s been obviously an incredible member of the team … a very strong defensive third baseman, a clutch hitter for us, a very focused player, works hard, and is very diligent in her skill work,” said Harvard head coach Jenny Allard, who is in her 16th season with the Crimson.

At this point in the season, the Harvard softball team is in the driver’s seat for an Ivy League championship push, and one of the key reasons is the senior slugger, who will trade in her batting helmet and jersey for a cap and gown in less than a month.

“I honestly can’t believe it’s ending. I can’t believe I have, maximum, a month left to play college softball,” said Schellberg, who has been playing the game since she was 9. “It’s been a really good ride. And I know when I look back on it, it’s going to be full of really fond memories, and I’m not going to have any regrets.”

“In my career, Melissa’s been one of the players who has impacted the totality of the program the most,” said Allard. “In all aspects, Melissa ranks high in terms of what she’s been able to do here.

“My comment to all of my players, and specifically to every class, is to always leave the program better than the way you found it. I think Melissa is a reigning example of that. She’s looked for ways to make the team better, have people grow and develop, and I think that’s a characteristic of a great leader.”

And so, although Schellberg may not have changed the world in her four years at Harvard, she can certainly say she’s left her mark.