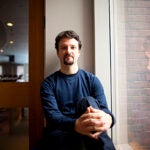 An education that works on two levels

Perfection is never easy to achieve, but the No. 1-ranked Harvard women’s squash team surely made it look that way.

After decimating No. 8 Williams on Feb. 26, 9-0, in the opening round of the College Squash Association’s (CSA) Team Championships at Yale, and then pounding No. 5 Yale, 7-2, on Feb. 27 in the semifinal match, the Crimson cruised to perfection in the championship final with a 6-3 victory over No. 3 Penn. The Crimson complete the season with an undefeated 11-0 record.

The championship is the Crimson’s 12th in program history, and their first since 2001. It is also the first national team championship at Harvard since 2006 (in fencing).

In the win, Laura Gemmell ’13, who won in three straight sets, improved to 11-0 on the year and has taken over the top spot in the country. Gemmell and a number of Crimson players will compete in the CSA Individual Championships in Hartford, Conn., March 5-7.