The many beats of Cultural Rhythms 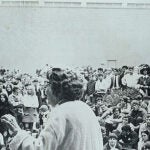 Performers from Harvard University’s ethnically diverse student groups gather each year at Sanders Theatre to participate in the annual Cultural Rhythms showcase. This year’s event, hosted by the Harvard Foundation for Intercultural and Race Relations, marked the 25th anniversary of bringing dance and music from around the world to one stage during the daylong festival.

The Indian Classical Dance Troupe opened the Feb. 27 show, and was followed by everything from bluegrass music to break dancing and mariachi.

“Whether we’re in the audience, backstage, or performing, for a short time this show brings us together as one community on a shared experience,” said the co-director of the afternoon show, Kevin Liu ’11.

Kelly Fitzgerald ’10, a member of Corcairdhearg, an Irish step dancing troupe, said that performing in Cultural Rhythms is a way to be part of a storied tradition.

“I think it’s a really crucial way to show all that Harvard has, because there are so many different cultural groups here,” she said.

S. Allen Counter, director of the Harvard Foundation, joined Dean of Harvard College Evelynn M. Hammonds to present the annual Artist of the Year Award to musician Wyclef Jean. Jean was honored for his creativity as a musician, fusing musical styles from around the world, as well as his efforts on behalf of the people of Haiti. He emceed the event, joking around with performers between acts, asking them to teach him headstands and back flips, singing along with the bands, and making cameo appearances in dances.

For Hammonds, the event symbolizes the diversity of the Harvard community and helps to bring people of many different backgrounds together.

“I think it’s one of the events people look forward to every year,” Hammonds said. “I think it’s just an extraordinary effort on the part of the foundation and the students involved. I can’t say enough good about it. It’s just great.”