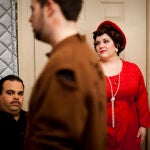 Those who know Harvard women’s hockey coach Katey Stone will tell you what makes her successful: her competitive fire and drive to win.

In 16 seasons at Harvard, that fire has driven Stone to do it all. She has led the Crimson to six ECAC regular season titles, five ECAC tournament championships, five Ivy League Championships, seven NCAA tournament appearances, three NCAA title game appearances, and the American Women Hockey Coaches Association (AWCHA) national championship in 1999. That season she was named AWCHA Women’s Coach of the Year.

Her past awards and accomplishments go on and on, but on Feb. 26 Stone found herself celebrating one more — and it was a big one. With the Crimson’s 5-1 win over Princeton in the ECAC tournament opener, Stone became the women’s college hockey all-time wins leader, surpassing former University of Minnesota and Colby College head coach Laura Halldorson.

“I’d be lying if I said it wasn’t important. I’m a very competitive person. I want to be the best,” Stone said after the win.

And although the ECAC victory is only the start of what Stone and the Crimson hope will be a long postseason run for Harvard, it did allow the legendary coach to reflect on her long tenure.

“I love the fact that I work at Harvard with the highest academic standards in the country, and we can get it done in the hockey rink,” she said. “This is for all the kids who played for me and listened to me rant and rave once in a while.”

Stone’s success has been unquestionable, but extends well past the Harvard gates.

And a night before her historic win, she watched five former players — three Americans, two Canadians — skate for an Olympic gold medal in the women’s hockey final. Overall, Stone has coached nine players who have gone on to compete in the Olympics.

“Watching the last couple of weeks of the Olympics, our kids have been in the key situations for their teams, and that makes me so proud, because I know they’re ready,” said Stone. “They’re able to mentally manage games and manage pressure. That’s why they get called upon in tight situations.”

A large part of this preparedness comes from the training and on-ice education Stone gives her players.

“She’s here to push us as hard as we can go and make us better as players. Coming into college, yeah, you’re all good players in [Division I hockey], but the point is to get better over your four years, and that’s what she does with players here. That is pretty much why I came here,” said junior forward Kate Buesser.

With the NCAA tournament approaching and the fourth-ranked Crimson a strong contender to get back to the national championship game, another title would be the best way to cap off such a historic season.

“We’re not out here screaming and yelling at our kids. Our kids are very self-motivated, and we challenge them to do more than they think they’re capable of. We remind them of that when they want to settle for a little bit less,” said Stone.