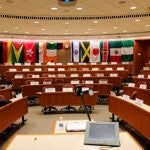 Bottom line gets a touch of green

Some might argue that the role of House master, which involves managing the social, living, and curricular lives of hundreds of students while teaching and conducting research as a faculty member, is one of the most demanding on campus. Now, imagine taking on the responsibilities of master with a new baby.

Ronald S. Sullivan and Stephanie Robinson began their stint as masters at John Winthrop House in September, 18 days after the birth of their second son, Chase Barrington. Son number one, Trey, was 8. And then there was their 11-year-old pug. “It is a tough juggling act,” Robinson said. “Not the master’s role itself, but having a new baby, which means little sleep for mom, along with the responsibilities that come with the job.”

“We never do anything the easy way,” Robinson said. “We put a lot into the hopper, and then figure out how to make it work.” And so they did. They hosted social events, including sophomore dessert parties to welcome students, tea parties for juniors, and senior wine tastings to educate students about wines and encourage them to drink responsibly. They hosted actor Blair Underwood and participated in several of his artist-in-residence activities. They also had open house parties for nonresident tutors.

“Having a good sense of community is really important to us. We wanted very much to be present, and to have our presence felt. So, we did a lot in the beginning that will surely pay off later.”

Sullivan and Robinson also made history when they were appointed the first African-American House masters at Harvard.

“There is obvious symbolic significance that Harvard has appointed the first African-American masters,” Sullivan said. “There is symbolic significance: that we will sign diplomas. Our appointment is testament to the growth of the University and American culture, in general, that a significant, important position is no longer occupied primarily by people of a single race or ethnic background.” He added, “But, we don’t master any differently. There is no black method of mastering. We are honored to serve in this capacity.”

“The experience of being African-American in the United States brings a different sensibility, brings a different rich heritage that is value-added. It is important to bring who you are, and authenticity to the role. It enriches the community of masters, students, faculty, and staff. We are happy to be a part of history. Hopefully, there will be many more,” said Robinson.

Sullivan, a 1989 Morehouse College and 1994 Harvard Law School (HLS) graduate, is clinical professor of law, director of the Harvard Criminal Justice Institute, and Edward R. Johnston Lecturer on Law. He joined the HLS faculty in 2007 from Yale University Law School, where he was associate clinical professor and founding director of the Yale Criminal Justice Clinic. But he is no stranger to Harvard House life. He was a nonresident tutor at Kirkland House, and later, a resident tutor at Leverett House while in law school.

Also an HLS graduate, Robinson holds a B.S. from the University of Maryland. She is a lecturer on law at HLS, is president and CEO of the Jamestown Project, and is a political commentator for the Tom Joyner Morning Show. She also served as the chief counsel for Sen. Edward Kennedy.

The “how did you two meet” story could have been written by Noel Coward. They were HLS students and met when they took husband and wife roles in an HLS Drama Society play. “Acting was fun,” Robinson said. “Hill Harper [star of the CBS drama “CSI: New York”] was also in the play with us.”

“We remain in the process of developing a vision” for their new roles as masters, Sullivan said. “We did not want to make wholesale changes in the traditions of Winthrop House. Nor do we want to be unduly captive by the House traditions. We want to retain what is working well, and augment that with our personalities.”

Sullivan and Robinson want to create a more robust Senior Common Room. They plan to host special masters’ teas with guests from around the world. As former actors, they want to bring more arts activities to the House. And, they want more and better sports activities.

“Most importantly,” Sullivan said, “we want to continue to work on scholarship. That’s what this is all about. We want to celebrate the scholar. We have already had special celebrations for those who have received recognition for scholastic achievement, such as the John Harvard Scholars. We want to place emphasis on our students’ being well-rounded individuals. Diversity of interests is very important to us.”

Robert Mitchell is assistant dean for diversity relations and communications in the Faculty of Arts and Sciences.