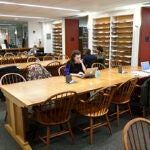 More than a year has passed since the Harvard women’s basketball team last lost at home, on Feb. 14, 2009. But the Crimson, who also had an eight-game winning streak on the line when they hosted first-place Princeton, saw both streaks end on Saturday (March 6), with a 78-66 loss to the Tigers.

Harvard, who slipped past Penn with a 55-52 victory Friday (March 5), entered Saturday’s contest two games behind the Tigers in the Ancient Eight standings with two games to go, needing a win to hold onto their Ivy League title and NCAA tournament dreams this season.

Meanwhile, Princeton, who had already defeated the Crimson once this season, 73-54, clinched a share of the league title the night before, and were just one win away from their first trip to the tournament.

From the jump, the second-place Crimson were tested by Princeton’s determination. After scoring the game’s first six points, the Tigers took a 9-2 lead after five minutes. But Crimson forward Emma Markley ’11 provided the spark for her team early on, scoring eight of her team’s first 14 points.

After tying the game at 14, the momentum swung in the Crimson’s favor. In a two-minute span, Harvard went on a 7-2 run to grab a 21-15 lead, making an early statement to the Tigers that to win at Lavietes, it would have to be earned.

Princeton got the message. After trailing by as much as seven in the first period, the Tigers went on a 13-3 run to close the half, entering the break with a 36-33 lead.

Falling behind by as much as five early in the second half, Harvard clawed their way back to a 52-52 tie. But a deeper and more physical Princeton team eventually prevailed.

“I think Princeton takes a lot of chances. They’re athletic, they have taller guards. Our guards are smaller,” said Harvard head coach Kathy Delaney-Smith. “They use that height and that wingspan to get pieces of the ball, so you have to make the extra pass and be a little more under control at times.”

Turnovers were a big back-breaker for the Crimson. Nine of Harvard’s 14 turnovers came in the first half, and were critical in Princeton’s late first-period surge.

Harvard faces off against Dartmouth in the season finale on Tuesday (March 9), aiming to close the season off with their 20th win, and then will await word of their first-round opponent in the Women’s National Invitation Tournament (WNIT).

“I think we’re good enough to do something in the WNIT, but I think right now … we have to be confident in ourselves and in our system,” said Delaney-Smith. “I think if I can get my team to know how good they can be, we can do some damage.”