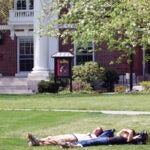 Milwaukee journalist recognized for 'Cashing in on kids' series

Raquel Rutledge, from the Milwaukee Journal Sentinel, has been chosen as winner of the Nieman Foundation’s Worth Bingham Prize, awarded annually to honor investigative reporting of stories of national significance where the public interest is being ill-served.

Her yearlong series, “Cashing in on Kids,” single handedly exposed massive fraud in Wisconsin’s taxpayer-subsidized child-care program and ultimately led to criminal probes, indictments, and new laws designed to strengthen supervision of the failed system. In the course of her reporting, she identified hundreds of providers with criminal records and helped uncover more than $20 million in suspicious payments to child-care providers.

Rutledge will receive a $20,000 prize at the Nieman Foundation for Journalism at Harvard on March 4 at a dinner and award ceremony in honor of journalist Worth Bingham ’54, a Harvard graduate who died tragically at the age of 34, after achieving prominence as an investigative journalist. His family and friends created the prize in his memory. It has been given annually since 1967 to recognize stories that expose an “atmosphere of easy tolerance,” similar to what Bingham himself once described in his reporting on the nation’s capital.