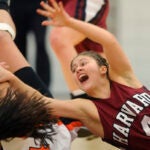 For Harvard juniors and their parents, graduation is still more than a year away, far off enough that there is ample opportunity to prepare for that exhilarating but somewhat daunting time. During Junior Parents Weekend (March 5-6), juniors and their parents enjoyed an early visit from spring and learned what to expect during that last year at Harvard.

As was the case during Freshman Parents Weekend, tours and open houses were offered in the libraries, museums, and student centers. But Junior Parents Weekend also focused on the challenges and opportunities that students will face as they prepare for life beyond Harvard.

“Junior Parents Weekend is a great time to see what the College can offer closer to graduation,” said Jeff Chernow, who traveled to Cambridge from New York City, and whose daughter, Victoria Chernow ’11, is concentrating in chemistry. “There is some anxiety now about what happens next.”

“We are looking to understand the whole process,” continued his wife, Imma Chernow. “For example, she wants to take a year off before medical school.” Chernow said she learned this weekend that students were advised to do exactly that. “We also want to know: How important is it to do a thesis? We have a lot of information, and we would like to sift through to find out what is important in her fourth year.”

But the weekend was as much about how students can experience Harvard to the fullest in their time remaining — even if that means trying something unrelated to any career path.

“Senior year is not just about career development, it’s about taking advantage of what Harvard has to offer,” said David Friedrich, assistant dean with the Office of Student Life, which organized the weekend. “We hope that juniors have a chance to explore something new, something outside the box, and to work on being well-rounded individuals.”

For juniors, House life is at the center of their Harvard experience. On Friday evening, the Houses hosted receptions for parents. On Saturday, parents sampled presentations from professors in the Faculty of Arts and Sciences, Harvard Law School, and the Harvard Graduate School of Education.

During a program on Friday in Sanders Theatre, President Drew Faust and Harvard College Dean Evelynn Hammonds welcomed parents back to campus. Hammonds moderated an informal and interactive student panel discussion with four seniors who talked about how they are maximizing their final year. The panel included Andrés Castro Samayoa ’10, Shiv Gaglani ’10, Julia Goldenheim ’10, and Casandra Woodall ’10.

In her opening remarks, Faust reflected on the last time she met the parents of the Class of 2011. Today, she observed, it is a different world than when they gathered for Freshman Parents Weekend in 2007, acknowledging the uncertain economic climate, and the competitive nature of the job market and admission to graduate and professional schools.

On that topic, the Office of Career, Research, and International Opportunities (OCRIO) presented a panel titled “Excelling Beyond Harvard.” The discussion, moderated by OCRIO director Robin Mount, included advisers from that office who specialize in helping students to establish career paths and apply to professional schools and other graduate programs.

Earlier, that office held an open house, where parents spoke one-on-one with career advisers and learned about electronic databases and resources available to students. Jerry Spector of Princeton, N.J., father of Andrea Spector ’11, wasn’t originally planning to attend, but stopped in when he and his wife noticed the office’s sign welcoming parents. He was glad he did.

“Now, with two or three years under our belt, the discussion shifts to exploring the future. We learned this office has a lot of useful resources for her,” he said.