It’s all in the cortex 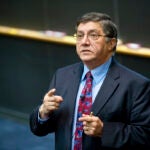 After a domestic squabble, brain activity appears to predict resiliency

Common wisdom says that domestic partners shouldn’t go to bed angry if they want to foster successful relationships. But new research from a psychologist at Harvard University suggests that brain activity — specifically in the region called the lateral prefrontal cortex — is a far better indicator of how someone will feel in the days following a fight with a partner.

Individuals who show more neural activity in the lateral prefrontal cortex are less likely to be upset the day after fighting with partners, according to a study in this month’s Biological Psychiatry. The findings point to the brain area’s role in regulating emotions, and suggest that improved function within this region also may improve day-to-day mood.

“What we found, as you might expect, was that everybody felt badly on the day of the conflict with their partner,” said lead author Christine Hooker, assistant professor of psychology in Harvard’s Faculty of Arts and Sciences. “But the day after, people who had high lateral prefrontal cortex activity felt better, and the people who had low lateral prefrontal cortex activity continued to feel badly.”

Hooker’s co-authors are Özlem Ayduk, Anett Gyurak, Sara Verosky, and Asako Miyakawa, all of the University of California, Berkeley.

Research has previously shown that the lateral prefrontal cortex is associated with emotion regulation in laboratory tests, but the effect has never been proven connected to experiences in day-to-day life.

This study involved healthy couples who have been in relationships for longer than three months. While in an fMRI scanner, participants viewed pictures of their partners with positive, negative, or neutral facial expressions, and their neural activity was recorded while reacting to the images. While in the lab, participants were also tested for their broader cognitive control skills, such as their ability to manage impulses and the shift and focus of attention.

For three weeks, the couples also recorded in an online diary their daily emotional states and whether they had had fights with their partners.

Hooker found that participants who displayed greater activity in their lateral prefrontal cortex while viewing their partner’s negative facial expressions in the scanner were less likely to report a negative mood the day after a fight, indicating they were better able to “bounce back” emotionally after the conflict.

“The key factor is that the brain activity in the scanner predicted their experience in life,” said Hooker. “Scientists believe that what we are looking at in the scanner has relevance to daily life, but obviously we don’t live our lives in a scanner. If we can connect what we see in the scanner to somebody’s day-to-day emotion regulation capacity, it could help psychologists predict how well people will respond to stressful events in their lives.”

While Hooker acknowledges that more work must be done to develop clinical applications for the research, it may be that lateral prefrontal cortex function provides information about a person’s vulnerability to develop mood problems after a stressful event. This raises the question as to whether increasing lateral prefrontal cortex function will improve emotion regulation capacity.

The research was funded by the National Institute of Mental Health and the National Alliance for Research on Schizophrenia and Depression.