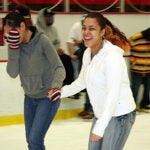 As a boy in northern England, David C. Parkes was upwards of 12 when he got his first computer. It was an Acorn Electron, beige and clunky, with 32KB of memory and one sound channel. He used it to program his own adventure games, set in mythical lands where visitors hunt for objects like gold or keys.

Parkes has the keys to his own kingdom now, or at least to an office in Maxwell Dworkin, where he is the Gordon McKay Professor of Computer Science at Harvard’s School of Engineering and Applied Sciences.

The academic world he inhabits is not a mythical land exactly, but contains mysteries enough for most of us. Parkes specializes in the arcane mathematical regions where economics and computer science intersect. “If you are working on both,” he said of the two disciplines, “the problems become extremely interesting.”

Parkes is an expert on combinatorial auctions, the bidding and buying of complex packages of goods that is one of the hidden algorithmic underpinnings of electronic commerce.

Combinatorial auctions inform a hybrid branch of economics and computer science that was pioneered in a 1982 paper about landing slots at airports. What a designer is after in such auctions is “optimization” — getting the most efficiency and value from a decision in which possible choices might number in the billions.

It’s no accident that Parkes is interested in operations research too, a branch of complex mathematical decision-making that rose out of Allied logistical demands during World War II. All of his Ph.D. students study it, along with economic theory, computer science, and artificial intelligence.

Operations research is all about “making operational decisions about how to allocate resources — for example, how an airline decides to fly which plane where and when,” said Parkes.

Such complex decision-making challenges a classical idea in economics: that markets are controlled by rational agents. “Humans are not the rational economic actors we like to theorize about,” said Parkes. So his research aims at designing markets that promote simplicity of interaction for market participants.

“We’re in the business of how to solve coordination problems and optimization problems that span boundaries,” he said, and there are many self-interested agents.

Parkes wants to construct mechanisms that simplify the decision making that agents have to do. That requires an intersection of computer science and economics. “The Internet itself is at once a computational system and an economic system,” said Parkes of the complex algorithms that underlie modern life. “You have to understand both.”

Coordinating decision making in the realm of the Internet may prefigure what he calls “a market of minds.” This future ensemble of connected computer systems would be “like an artificial social system,” said Parkes, and provides structure to the idea that intelligence is modular.

Then there is what artificial-intelligence futurists call “singularity,” a point in the future when machines acquire general intelligence that is superior to human intelligence. That may be just 30 years away, said Parkes. “There are all these questions that sound like science fiction.”

In the meantime, he added, scientists have to begin thinking of the ethical implications of such shifts.

Parkes still has the old Acorn Electron in his home office — a reminder perhaps of the happy accidents that he said have made the past two decades a “whirl” — from a state school in his home village of Holmes Chapel, to an engineering science degree at Oxford University, doctoral studies at the University of Pennsylvania, and a post at Harvard since 2001.

“I had this very early introduction to computers,” said Parkes, whose father is a physicist and whose mother a one-time dental office radiographer. “But I never thought that it was an academic trajectory.”

And yes, there is life outside computer science. Parkes is an avid cook and gardener, and is refurbishing an old Victorian house in Cambridge with his partner, Robert Carr, an artist and architectural enthusiast. “It’s a work in motion,” Parkes said.