“Good” cells can go “bad” in a “bad neighborhood” 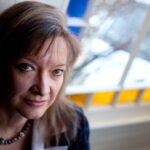 Playing on our instincts

The general theory of cancer development holds that
malignancies occur because of the presence of certain genetic elements within
the affected cells.

But a new study by Harvard researchers at Massachusetts
General Hospital (MGH) indicates that “good” cells can become cancerous because
of exposure to a “bad” environment within the body — similarly to the way a
“good boy” may turn to crime when exposed to the pressures of life in a
crime-ridden neighborhood.

In their paper in today’s edition of the journal Nature, David T. Scadden and colleagues
report that normal blood stem cells “are dependent upon their environment. They
get their cues from the surrounding ‘neighborhood’ of bone cells,” says
Scadden, co-director of the Harvard Stem Cell Institute and director of the MGH
Center for Regenerative Medicine. “It [the environment in which the cells
develop] can make the system go askew,” Scadden explained.

Working with mice with normal blood stem cells, Scadden, who
is also co-chair of Harvard’s inter-School Department of Stem Cell and
Regenerative Biology (SCRB), and his team found that when they made a particular
genetic alteration in the bone cells surrounding the blood stem cells of the
mice, the mice developed a condition called myelodysplasia, a blood disease
that is often a precursor of acute myelogenous leukemia (AML), a highly
aggressive, usually fatal, form of cancer.

Scadden said it has long been known that a large fraction of
patients who develop myelodysplasia “don’t have any known genetic abnormality
in their bone marrow. But myelodysplasia is called pre-leukemia, so why don’t
they? That suggests that it’s not their blood stem cells that are defective,
but rather that there’s something wrong with the environment in which their
blood cells reside.”

According to Marc H.G.P. Raaijmakers, a postdoctoral fellow
in Scadden’s lab and the lead author of the Nature
report, “our findings bring new insight into how cancer can emerge, indicating
that nearby cells gone bad can facilitate a cell becoming malignant.

“In this case,” notes Raaijmakers, “the mice developed fatal
AML and were shown to have rapidly developed new genetic injuries in blood
cells” after exposure to the defective bone cells in their environment.

Scadden and Raaijamakers both said that the findings might
suggest a new approach for developing cancer therapies — targeting interactions
between the cells that become malignant, and the “bad” cells in their
neighborhoods.