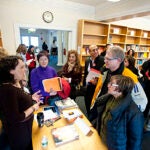 Cambridge may soon be called the college squash capital of the United States.

The titles come just two weeks after Gemmell and the Harvard women’s squash team won the 2010 CSA national team championship (Feb. 21) over Penn and West helped lead the Crimson to a fifth-place finish.

West defeated Princeton’s Todd Harrity (11-9, 13-11, 11-1) in Sunday’s title match, claiming the men’s crown and completing the season with a 16-1 record. He is the 33rd Harvard player to win the Pool Cup, and completes his career at Harvard with a 50-9 record. West was also awarded this year’s Skillman Award, given annually to a senior men’s player “who has demonstrated outstanding sportsmanship throughout his college squash career.”