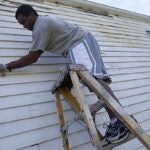 Their Web sites could hardly be more different. One urges students to join a community of online learners “to keep pace with the changing world.” The other points to Chaucer, Einstein, Freud, and Plato atop its home page.

The representatives of two distinct approaches to higher education met at Harvard last week to present their philosophies on learning.

The president of the University of Phoenix, with a for-profit model and a digitally connected student body, and the president of St. John’s College, a small, liberal arts school that emphasizes classroom dialogue around the classics, outlined the merits of their respective models during a discussion at the Harvard Graduate School of Education (HGSE) on Thursday (March 11).

The event, titled “Classic College Meets Online Opportunities: Whither the Future of Higher Education?” seemed destined for some tense moments.

And while the event’s moderator, Joseph Blatt, HGSE lecturer in education and director of its Technology, Innovation, and Education program, said there might be “sparks,” the discussion was devoid of fireworks. Instead, the presidents explained their respective approaches to higher education and agreed that the future has room for both.

Society still needs a place where learners can focus on the classics, said the president of St. John’s, Christopher B. Nelson. An alumnus of the college who once practiced law, Nelson noted that the college’s curriculum, which is based on the study of the Great Books, revolves around intimate classroom discussions. Simply referred to as “The Program,” the curriculum offers students a critical foundation in the liberal arts.

Talking about what’s ahead for higher education, Nelson said, “The future will always have room for an education in what it means to be human.”

Works by the Greek poet Homer, the biblical Book of Moses, and literary classics such as the “The Epic of Gilgamesh” are fundamental texts that address issues such as heroism, love, betrayal, and friendship — all subjects that have “a remarkably contemporary feel,” said Nelson.

“We at St. John’s have said we think we know better than the typical 18-year-old what a good education is,” he said, “and we refuse to flatter them and pretend that they know more than we do about what is best for their education.”

Founded on the back of the electronic age, the University of Phoenix offers more than 400,000 students the opportunity to learn in a largely digital environment, at their own pace, from any location.

“Our students don’t make a distinction between physical and virtual learning,” said university President William J. Pepicello. “What they tell us is ‘it’s all the same to us,’  ‘I want it when I want it, where I want it,’ sort of like their experience in the rest of life.”

While many students benefit from the traditional college campus experience, almost 75 percent of higher education students in the country, said Pepicello, want and need something else. Such “next generation learners,” he said, have goals such as security for their families and the respect that comes from having a college degree. Many have schedules and responsibilities that make a typical campus experience impossible.

In addition, he said, they “do not expect that they have to know everything. They only need to know how to access the information at those times when they need it.”

Pepicello argued for a move away from the “cottage industry” of higher education, where knowledge is “owned” by the faculty and then transmitted to students, to a more collaborative model based on a sound technological infrastructure.

“Knowledge is everywhere,” he said, “and we need to be able to manage that within the structure of higher education, if we are to keep pace with the rest of culture.”