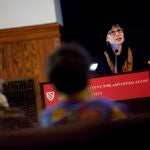 Haiti looks toward the future, as Harvard affiliates buckle down

The camp that houses 35,000 of Haiti’s earthquake homeless is a sprawling mess of tarps and bedsheets, of steamy air and brimming latrines, of people who’ve lost everything — houses, possessions, family members — yet whose first thoughts concern the children.

“No child in Haiti is in school now,” said Jacky Coutia, a member of the camp’s leadership committee. “There are so many children here, they’re just racing around.”

Coutia was talking to some visitors to the camp, built on a former military airfield in battered Port-au-Prince. Among them was Louise Ivers, assistant professor of medicine at Harvard Medical School, physician at Harvard-affiliated Brigham and Women’s Hospital, and Haiti clinical director of Partners In Health (PIH) , the nonprofit group that runs mobile clinics there. The camp houses about 12,000 children, evidenced by homemade kites fluttering overhead and a pickup basketball game nearby. The camp also has several trained teachers — who could start a school if they could find tents for a classroom.

Coutia and the other survivors of Haiti’s cataclysmic Jan. 12 earthquake are slowly picking up the pieces of their shattered lives and beginning to look ahead. Even as the immediate medical emergency begins to transform into something like a recovery, faculty members and staff from Harvard University and its affiliated hospitals are making plans to “accompany” Haiti into its uncertain future.

That future will include rehabilitation for the thousands injured, including physical therapy and prosthetics for those who’ve lost limbs. It will require procuring food, water, and shelter for the homeless, huddled in camps like Coutia’s. It will mean staving off infection and disease before they pounce on weakened constitutions amid unsanitary conditions. It will mean caring for quake orphans and the psychologically traumatized, who cry out as night falls or refuse shelter for fear that the buildings will collapse. It will mean helping to rebuild hospitals, schools, and governments, the systemic structures that create order and provide framework for Haiti to “build back better.”

As the recovery begins, Harvard affiliates will keep their sleeves rolled up. Roles will be played long term by Harvard Medical School (HMS) and Harvard School of Public Health (HSPH) faculty members, including Joia Mukherjee, assistant professor of medicine and a Brigham and Women’s physician, and Paul Farmer, who holds appointments at both HMS and HSPH and who is also a physician at the Brigham. Along with Ivers, they work through Partners In Health, which Farmer co-founded decades ago and which has lengthy experience providing health care in rural Haiti.

Roles will be played in the intermediate term by figures such as Hilarie Cranmer and Michael VanRooyen of the Harvard Humanitarian Initiative (HHI), who also have appointments at HMS and HSPH and who willed a field hospital out of the dried grass outside Port-au-Prince in the weeks after the quake. S. Allen Counter, a professor at HMS and in the Faculty of Arts and Sciences and director of the Harvard Foundation, recently worked on the shelter problem by procuring and distributing 150 tents to homeless families in Port-au-Prince, a follow-up to an earlier relief trip.

Important roles will be played by scores of skilled volunteers from Harvard and its affiliated hospitals — surgeons, nurses, and technicians — who provided vital aid in the initial quake response and in many cases plan to return for the rebuilding ahead.

The shape of that effort is still emerging. Though initial attention focused on those killed and injured, the earthquake destroyed not just buildings, but also much of the infrastructure that makes Haiti’s economy and society function.

“École, église, état — Haitians say it flattened the three E’s: school, church, state. It flattened the things most important to society,” said Natasha Archer, a Haitian-American physician and resident at Brigham and Women’s Hospital who coordinated medical volunteers for Partners In Health in Port-au-Prince, the capital.

“Things will get better”

Lucknerson Shackleton, a quake survivor who is now a cook at the HHI field hospital in Fond Parisien, can attest to the depths of displacement. He was walking down the road when the quake hit and buildings tumbled around him. Two days later, he found his daughter under the rubble, her arm broken. Three hospitals later, they wound up in Fond Parisien.

“Before the earthquake, I had a restaurant in Port-au-Prince,” Shackleton said. “I lost everything.”

Shackleton praised the international response, saying there would have been many more deaths without it. Though he has work for now as a cook, his own future is uncertain. He hopes to start anew, helping others, perhaps by creating a nonprofit to provide school lunches.

“Now I feel like I’m doing … what I should have been doing a long time ago, helping people out,” Shackleton said. “Eventually, times will turn, things will get better.”

“Building back better” is prominent in Farmer’s mind when he thinks about Haiti — with the emphasis on better, as in better health care, education, jobs, and houses. In the years since Farmer co-founded Partners In Health, the organization has expanded beyond Haiti to other nations. The Haiti operation, Zanmi Lasante, working with the Ministry of Health, has become the country’s largest health care provider.

Farmer predicted there will be some ugliness in the reconstruction, as organizations vie for the projected flood of funds. Universities, he said, should steer clear of that short-term frenzy and instead engage in “accompaniment,” walking the long road forward with Haitians, forming partnerships, building local capacity, always keeping in mind that the best solution for Haiti will be a Haitian one.

“If I were a reconstruction czar, I would say the report card on our endeavors has got to be 500,000 new jobs for Haitians,” Farmer said. “The road ahead is going to be paved with good intentions. But it’s not going to work unless it’s focused on job creation for Haitians.”

In that rebuilding effort, the path for Partners In Health will shift somewhat. The group has been thrust into disaster relief and had its geographic focus broadened from the countryside to now include Port-au-Prince, Haiti’s biggest city.

When Partners In Health takes inventory, it sees a crying need for health care in the crowded camps that, for better or worse, are now called home by thousands. To help, the organization created mobile health clinics, run by a team of 230, including doctors and other medical staff. They set up operations right in the camps, providing primary care, reproductive health care for women, and HIV/AIDS treatment, while targeting diseases that arise in crowded, unsanitary places: malnutrition, malaria, diarrhea, typhoid, dengue fever.

“What we want to avoid now … is just doing first aid — bandaging wounds — and get into primary health care because these people will be here for some time,” Ivers said.

Another focal point for Partners In Health is the capital’s University Hospital. Mukherjee, Partners In Health’s medical director, is amidst discussions with hospital officials about the center’s future. Partners In Health provided critical assistance after the quake, funneling in volunteer U.S. medical personnel to staff the wards. The question now is what the ongoing relationship between the two organizations should be.

Mukherjee said PIH wants to help the hospital rebuild and could play a facilitating role between the hospital and other entities. She said it is imperative to increase its budget, which is less than a hundredth that of a major U.S. hospital. Lack of funding threatens to strangle any advancement in facilities and care.

Alix Lassegue, University Hospital’s medical director, said the volunteers from Harvard and other hospitals were critically important following the quake. Going forward, Lassegue identified two major needs: to help clear and rebuild structures destroyed in the quake, and to train Haitian medical personnel, possibly through exchanges with major medical schools, such as Harvard’s.

East of Port-au-Prince, near the Dominican border, is the field hospital established under the leadership of the Harvard Humanitarian Initiative in Fond Parisien.

Though HHI’s involvement, by design, is expected to be more temporary, officials expect to be in Haiti for six months to a year, long enough to rehabilitate the patients and integrate them back into the community or into local medical facilities. HHI officials also want to leave behind strengthened institutions, from the Love A Child orphanage on whose grounds they’re located, to area medical clinics and other facilities.

The field hospital, an HHI-led collaboration with the University of Chicago, Love A Child, and other partners, provides broad-based care for earthquake victims, including amputations, skin grafts, treatment of infections, and physical therapy. There are special teams for unaccompanied minors and outreach teams to identify those whose medical needs are unmet, and to improve local health care capacity.

Jennifer Scott, an instructor in obstetrics, gynecology, and reproductive biology at Harvard Medical School and an obstetrician at Beth Israel Deaconess Medical Center, worked at Fond Parisien in mid-February, spending half her time at local clinics. The experience helped her to understand how the level of health care was low even before the quake. She found a clinic in Christ Pour Tous that had an operating room but no full-time obstetrician to perform cesarean sections. Scott is exploring ways to fund a full-time doctor there. If successful, that effort would provide some health-care security for women even after the field hospital winds down.

“What makes obstetric care in the field so difficult is the fine line between routine and emergency,” Scott said. “There’s potential there,” at Christ Pour Tous. “That’s the site we’re focusing on.”

As Haiti stabilizes the present, many eyes are now looking to the horizon.