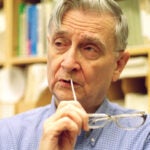 Radcliffe Magazine, the signature publication of the Radcliffe Institute for Advanced Study and successor to the Radcliffe Quarterly, debuted in late February. The publication’s previous design had been in place since 2002, a year after Drew Faust became dean of the institute.

Planning for the new publication began following the appointment of Barbara J. Grosz as dean in 2008, and the updated magazine launched during the institute’s 10th anniversary year.

Design director Ronn Campisi, who also designs the Harvard Law Bulletin and Smith Alumnae Quarterly, has enlivened the look and feel of the Radcliffe publication by using distinguished photography and inviting headlines and teasers. He also moved the institute’s event coverage from the back of the magazine to the front.

In the interests of sustaining the environment, the magazine is shorter now and no longer includes class notes in the print version. From now on, class notes will be posted on the Radcliffe Web site, appear in Harvard Magazine, or be posted online on the Harvard Alumni Affairs and Development Web site. The magazine is also available on the Radcliffe Web site.

­If you have an item for Around the Schools, please e-mail your write-up (150-200 words) to georgia_bellas@harvard.edu.